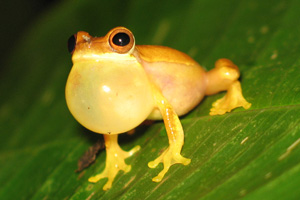 A Blood-sucking Midge on the nose of an Hourglass Tree Frog male that is calling for a female.

The world’s frogs and other amphibians are disappearing at an alarming rate. In the past 30 years, about 200 amphibian species have vanished – that’s loss of about one species every two months.

Scientists know it is happening, the question is why? Texas Tech biologists Ximena Bernal and Michael San Francisco are trying to understand the factors contributing to the increased mortality of these important animals.

Undergraduate and graduate student researchers in Bernal’s lab are using Save the Frogs Day Friday (April 29) to raise awareness about the flight of amphibian populations by attempting to set a world record for the largest gathering of people wearing frog masks.

“Frogs are great bio-indicators of environmental changes in our world,” Bernal said. “Amphibians are sensitive to potential toxins in both the water and in the soil. If they are dying out, then it is telling us we may have problems.”

“The event is a fun way to make people aware of a very serious problem,” Bernal said. “Frogs are very important to our ecosystem. They eat insects such as mosquitoes that carry diseases that harm humans and animals. And they in turn are food for other creatures. If frogs disappear, then the food chain is disrupted and we do not know what kind of negative ramifications that would have on other species.” 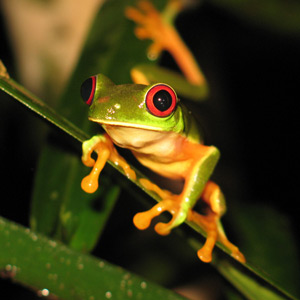 Red-Eyed Tree Frogs do not seem to attract the Blood-sucking Midges.

Researching to Save the Frogs

Bernal is looking at frog behavior. One area of concentration is determining why some amphibians are flourishing. The cane toads are thriving in places such as Puerto Rico, Hawaii and Australia.

“We are trying to learn why this toad is successful. Perhaps they are just really smart, or really adventurous,” she said. “It appears they are able to learn how to adapt to changing food supplies and conditions as they invade new areas.”

Many amphibians will not eat food that does not move. The cane toad has learned to eat things that do not move, such as dog food.

Bernal is also looking, or listening to how frogs talk to each other. “Frog calls are different from each other and as distinctive as bird song or human accents,” Bernal said.

“In most frog species only the males call, hoping to attract a female,” she said. “Their calls may also attract flies that feed on the frog’s blood and in the process are transmitting potentially fatal parasites to the frogs.”

Another potential threat to frogs is a type of fungus called Batrachochytrium dendrobatidis, or Bd for short. The fungus is the object of San Francisco’s interest.

This fungus affects the outer layer of the frog skin making it thick and may result in loss of skin. For amphibians, that is deadly because they absorb water and essential salts through the skin and not the mouth. Additionally, much of their gas exchange occurs through their skin. San Francisco and his team are trying to understand how the fungus works and how it kills.

“The fungus is like the plague. It is the worst infectious disease to ever hit wildlife on this planet,” San Francisco said. “If we can find its Achilles heel, we can maybe find out to treat it or get rid of it. It’s important that we find out more about the biology of the fungus in order to stop it. We don’t know how or where the fungus will move next if our amphibian population is decimated.”

Plant Ecologist: Weather One Major Cause for Texas Wildfires