Ron Kendall said the small sample size represents a single snapshot of time and space, and more research is necessary to see the full picture. 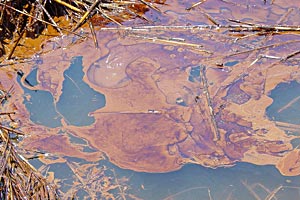 Kendall said that more research is necessary to see the full picture of the effect of the oil spill.

Though these samples were clean, the sample size was small and more research is necessary before the full picture can be seen, said Ron Kendall, director of The Institute of Environmental and Human Health (TIEHH).

“We found the same thing as we did in our August sample report,” Kendall said. “There was no evidence of petroleum hydrocarbons in the low parts-per-billion range. So, in terms of total polycyclic aromatic hydrocarbons (PAHs), of which some are known to be toxic or carcinogenic, they were clean. However, everyone should realize the sample size was extremely small and that these data represent just a snapshot of time and space. These samples were collected close to the shore. We don’t know that this may be the case further out at sea. We believe sampling and analyses should continue, and that independent science-based research needs to continue.”

Near shore, Kendall said wave action, sunlight and shallow water help to break down toxic oil residues. He said little is known about the state of the oil trapped in the water column, mixed with dispersant and/or resting at the bottom of the Gulf of Mexico. Oil may not degrade as easily in deeper waters with less oxygen. Also, ultra-violet light can’t reach to aid in breaking down the oil.

They were shipped on ice overnight to the institute on April 13, where they were received in excellent condition and smelled fresh before processing, Kendall said.

Once tissues were extracted, scientists analyzed them using gas chromatography with mass spectrometry, said Todd Anderson, an environmental chemist at the institute. The process is used to determine substances within a specific test sample, and is widely regarded as the gold standard for forensic substance identification.

“We were particularly interested in polycyclic aromatic hydrocarbons, some of which can be carcinogenic,” Anderson said. “The analytical results revealed that the PAHs we analyzed for were below detection limits of our instrumentation, and far below any levels of concern as regulated by the U.S. Food and Drug Administration.”

Trace Analysis Inc. of Lubbock, Texas, a certified laboratory in Texas and Louisiana, assisted with the analysis.

This project took five days to complete and was done without support from BP or the United States Federal Government.

Philosophy Student Rings In on 'Jeopardy'