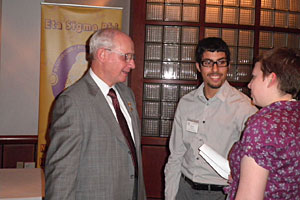 Some of George's most notable work involves educating teachers on how to use Latin as a bridge to Spanish.

George was one of two recipients who received this honor at ESP’s annual national convention at the University of Texas at Austin.

“To the College of Arts and Sciences, the Department of Classical and Modern Languages, and especially to the people in classics who were with me as colleagues, I am grateful for providing a stable, supportive environment for well over three decades,” George said. “Let’s celebrate together.”

George, a Texas Tech professor since 1971, spent the last 40 years participating in activities which qualified him for this honor. Some of George’s most notable work involves educating teachers on how to use Latin as a bridge to Spanish.

He also was honored for his research in Neo-Latin, the body of Latin used from the Renaissance onward. He also co-edited, “Columbus’ First Voyage,” a Latin text that exemplifies the value of Neo-Latin as a source of documents on early European exploration of America.