Plant Ecologist: Weather One Major Cause for Texas Wildfires

Assistant Professor Dylan Schwilk said La Niña has much of the blame for the recent wildfires. 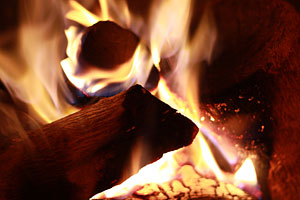 The current fire problem in West Texas is being fed by dormant, warm-season perennial grasses throughout the high and rolling plains area.

About 1.5 million acres of Texas has burned this year, and a Texas Tech plant ecologist said a natural weather event called La Niña has much of the blame for the recent rash of wildfires.

Dylan Schwilk, an assistant professor in the Department of Biological Sciences, researches plants and fire. He’s studied the effects of wildfires in places such as the California, South Africa, Australia and Texas.

The current fire problem in West Texas is being fed by dormant, warm-season perennial grasses throughout the high and rolling plains area he said. Last year’s El Niño event helped these grasses grow thick. After going dormant for the winter, and because of this year’s La Niña drought, it’s left plentiful fuel lying on the ground.

“Here in West Texas, we get these powerful, low-humidity winds,” he said. “It’s amazing what fire will carry through out here. Even in heavily grazed areas, the winds lay fires flat. It’s very likely the relatively good rain we received last year contributed to higher fuel loads.”

Though recent fires make the landscape look devastated, almost all parts of the plants will survive the fires because grasses are still dormant and have very little living tissue above ground at this time of year, Schwilk said.

Most native woody plants, such as oaks, mesquite and other shrubs, will build new shoots from below-ground tissues even if partially or wholly burned. Also, some oaks have protective bark that shield the plant from fire.

Since the late-Miocene Period about 8 million years ago, fires have actually helped the spread of warm-season grasslands in Texas, such as those in the Southern High Plains. The grassfires burn hot, move very quickly, but they mainly burn upward. Grasses resprout because temperatures at the soil level don’t get hot enough to kill the root system.

“The buds for these grasses are at the surface,” he said. “But, with no rain, they haven’t yet used their energy stores by investing in new leaf growth. If you have a hot fire with smoldering, say in a woody area, you can have plant death. But you don’t have that with grassfires. Fire is part of the reason for the spread of grasslands because the fires favored grasses at the expense of woody plants.”

Structures can be at risk as much from wind-borne embers as from the flaming front, Schwilk said. This can be especially problematic in other parts of the state with woodier growth, such as Possum Kingdom or the Junction areas, which have more wooded areas and juniper shrubs.

Unlike grassfires, wood-fueled fires can push burning embers into the atmosphere, only to land and start spot fires elsewhere, much like the problems faced in California.

“In California, houses burn down not necessarily because the flames move through a subdivision,” he said. “It’s because of embers that land on a wood shingle, in an eave or overhang, or in an attic vent or land on material propped up against a fence or an exterior wall. Vents covered with a fine screen can make a huge difference.”

Schwilk also suggested keeping areas near housing mowed and replacing attic screens with fine mesh screens in heavily wooded areas. Providing fewer places for embers to land and ignite is important. Keep leaf litter out of gutters and off of roofs and consider pruning up trees and shrubs near structures.