Philosophy Student Rings In on 'Jeopardy'

Jason Rhode attributes his degree for the critical thinking skills necessary for the iconic quiz show. 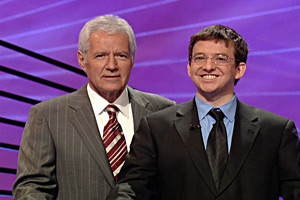 Rhode, pictured with Alex Trebek, is pursing a master's degree in philosophy.

He admitted he’s not the rabid fan of “Jeopardy” that his younger sister is.

But when she threatened him with “bodily injury,” philosophy graduate student Jason Rhode decided to go ahead and appease his sister by taking the online test for the iconic quiz show.

Little did he know it would earn him a spot in front of the cameras and host Alex Trebek.

“When you ring in your answer, it’s like when you’re in a batting cage and your bat connects with the ball – that vibration you feel in your arm,” Jason said. “Getting to ring in on ‘Jeopardy’ feels awesome. I cannot stress that point enough. It is the best feeling in the world. You beat everybody else and got your answer in first.”

Better Chance of Getting into Harvard

The Lubbock native and Texas Tech graduate student of philosophy spent a year and a half waiting for an opportunity to give the questions to answers on Tuesday’s broadcast. And while the Final Jeopardy answer took him down to third place, he said he got an experience he’ll never forget.

He attributed his philosophy degree for giving him the critical thinking skills that helped him choose the right answers and stay in the game.

“My sister is the ‘Jeopardy’ fan in the family,” Rhode said. “And my mom. Every time the show came on, they said ‘Jason, you’ve got to try out for this.’ They kept bugging me about it. So, I said, ‘Yeah, OK. Sure. Whatever.’ Then, they had online tests. I was working for a newspaper in Lawton, Okla., at the time. My sister basically threatened me with egregious bodily harm if I didn’t take this test. So, I did. That was in January 2009. By March, they said ‘you’ve been accepted for try-outs in Chicago.’”

Even then, Rhode said he never got his hopes up. Show staff advise never to make special trips just to audition for the show. He knew from a book written by 74-time “Jeopardy” winner Ken Jennings that he had a better shot statistically at getting into Harvard than becoming a contestant.

“I was going to Louisville for a wedding, so I figured, ‘Why not?’” he said.

He had friends in the Windy City he could visit while he tried again to earn a spot.

Following Chicago, the crew told him that it may take up to a year and a half. Six days after that year and a half was up, Rhode got the call to come out to Culver City, Calif., and become a contestant. 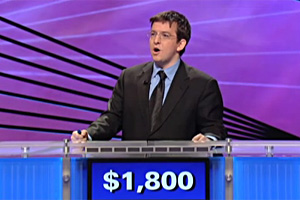 Rhode said "Jeopardy" was the fastest 22 minutes of his life.

Katie Rhode is Jason’s insistent sister who earned her doctorate in counselor education this December at Texas Tech. She said the game show was tailor-made for her older brother because of his ability to retain almost anything he reads. Since childhood, she said she remembers her brother reading, say, a chapter of Shakespeare followed by a chapter of ancient Greek philosophy before bed, then talking about what he’d learned the night before in awe-inspiring detail.

“In our family, it’s a big running joke,” Katie said. “You ask Jason a question about ‘How did this work out in history?’ And we’ll have to say, “Give us the three-sentence answer,’ because he’ll go on and on if you don’t.

“I’ve loved ‘Jeopardy’ since I was a little kid. I thought ‘He has to do it. He has that rare gift.’ So, I threatened him. On the test, he missed, like, one out of 50. I took the test, too, and I’ve never been so humbled in all my life. From there, it took off. Everyone who knows him is not surprised. It was just a matter of time and his sister threatening him before he wound up on the show.”

On Tuesday’s episode, Rhode and other contestants tried to give the questions to answers ranging from the U.S.S.R., the Tea Party, Rabbits, “Alice in Wonderland” and other pop culture and sports-related topics.

He described the experience as the fastest 22 minutes of his life.

“When you’re watching it at home, it seems like an intellectual exercise, and it’s a lot more laid back because there’s no penalty,” he said. “When you’re actually playing it on the set, it’s a lot like playing a sport. The entire things are pretty much like playing basketball or baseball. Your attention is so narrow. You get in the zone. There’s not a lot of time to think about it. You’ve got to have all the answers or a pretty good guess. It’s a visceral experience.