A new Masked Rider is named and past Raider Reds revealed. 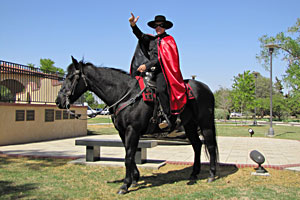 During the ceremony, Bradley Skinner accepted the reins to Midnight Matador.

In the annual Transfer of the Reins and Passing of the Guns ceremonies, Midnight Matador finds a new Masked Rider, and Raider Red's identity is revealed.

Transfer of the Reins

In the coming year he will promote spirit within the university and goodwill for Texas Tech at athletic events and other school and civic functions across Texas.

Skinner started riding and showing horses at the age of five. He spent nine years in the 4-H horse program and seven years on a 4-H horse judging team. In 2003 he was the youngest member in Colorado 4-H history to achieve Level 4 Master Horseman, the highest horsemanship level attainable in the horse project.

Subsequent to being an active member of the CSU Ranch Horse Team, Skinner became the stallion trainer at the university, being entrusted with full-time care of both client and university-owned stallions.

“After being stallion trainer at CSU for two years, I decided to fulfill a long-time dream and transfer to Texas Tech,” Skinner said, “Being the Masked Rider means being a part of something that is bigger than myself, and being able to represent what can happen when someone follows their dreams and works hard every day. Being the Masked Rider is the highest honor any student here can achieve, because it represents Texas Tech – the people, the pride, the tradition and honor of the university.”

Christi Chadwell, the 2010-2011 Masked Rider, traveled more than 11,000 miles making appearances at athletic events, rodeos and other functions. She appeared at more than a dozen men’s and women’s basketball games and several Texas Tech baseball games. Her most cherished appearance was at the Scottish Rite Hospital Farm Days. Because she had been a patient there earlier in her life, being able to be a role model for the children there was one of the highlights of her term as Masked Rider. 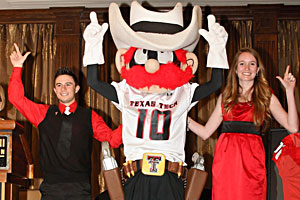 Cody Crea and Karina Perry were revealed and honored for their duties as Raider Red during the Passing of the Guns ceremony.

Passing of the Guns

After serving in secret as Raider Red, students Karina Perry and Cody Crea finally revealed their true identities as Texas Tech University honored them for their service.

The former mascots transferred their duties to new students Friday during the sixth annual Passing of the Guns Ceremony.

With his red mustache and floppy white hat, the swaggering Raider Red is a symbol of Texas Tech spirit and pride. He was designed by Saddle Tramp Jim Gaspard based on the illustrations of Dirk West.

Perry, a senior Restaurant, Hotel, and Institutional Management major from Windcrest, served as Raider Red for two years. She also is a member of the High Riders, and served as sergeant at arms and standards, and spirit committee head for the organization.

One of her favorite activities as Raider Red was directing the Goin’ Band at football games.

“Another of my favorite memories is running the team out onto the field during the Colorado game last semester,” Perry said. She made 113 appearances in the costume during the two years incognito.

Crea, a senior mechanical engineering major from San Antonio, served as Raider Red for three seasons. In addition to his duties as Raider Red, he was a member of the Saddle Tramps and held positions as assistant pledge trainer, Raider Red chairman and homecoming chairman. He is a member of the American Society of Mechanical Engineers and of the National Cheer Association as a mascot instructor.

The ESPN College GameDay appearance in Lubbock in 2008 is a memory Crea will never forget.

“From watching them put on Raider Red’s head and fire the shotguns, to the last second Crabtree catch, it was an awesome time in my life, and I’m glad I got to represent our university on one of the biggest stages in college football at that time.”

Crea appeared as Raider Red more than 200 times in the three years he spent as the mascot.