Entering the tournament as the 4th seed, the Texas Tech team pulled off a huge upset. 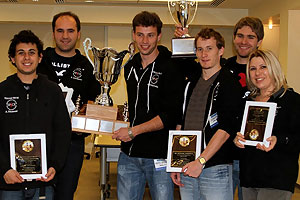 Texas Tech invites the public to join the Masked Rider and representatives from the Saddle Tramps in the welcome home celebration for the chess team, fresh from its Final Four victory this weekend in Washington, D.C.

The event will be held at the Lubbock Preston Smith International Airport. Well-wishers are encouraged to meet at 10:10 p.m. today (April 4) at Baggage Claim No. 1.

The Knight Raiders entered the tournament as the 4th seed with an average rating of 50 points lower than the other three teams, and pulled off the upset after a series of team round-robin games in the President's Cup.

The Knight Raiders include three grand masters and an international master:

The team's flight is scheduled to return at 10:20 p.m. (April 4) from Washington, D.C. Well-wishers are encouraged to meet at 10:10 p.m. inside the airport terminal.

The Texas Tech Chess program is a unit of the Division of Institutional Diversity, Equity and Community Engagement.

Texas Tech a Launching Pad for a Pulitzer Prize Winner