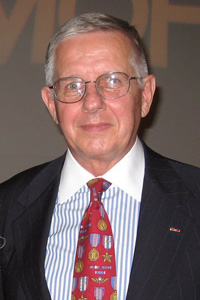 Reckner was selected for his contributions to establishing the Vietnam Center and his dedication to Texas Tech.

The office selected Reckner for his contributions to establishing the Vietnam Center and his dedication to Texas Tech. Reckner has worked to create a number of partnerships between Vietnamese institutions and Texas Tech. In addition, he has led initiatives to assist the institutions, such as establishing scholarships to allow Vietnamese students to attend universities in their home country.

Home to more than 20 million books, letters, photos and other documents, the Vietnam Center and Archive holds to the largest collection of Vietnam War-related materials outside the National Archive. The center also organizes and hosts many major events related to the Vietnam era.

The Whitacre College of Engineering received the award for its initiative to maximize study abroad opportunities for engineering students – most importantly at the Texas Tech Center in Seville, Spain. The office recognized the college for increasing the numbers of students participating in study abroad programs from 51 in 2009-2010 to 109 in 2010-2011. Last summer the college sent two faculty-led programs with 23 students abroad. This summer, the program has more than doubled to 87 students at four sites. In the fall, six students will participate in an exchange program with the Czech Republic.

John Kobza, senior associate dean and professor of industrial engineering, and Shelli Crockett, director of the Engineering Opportunities Center accepted the award on behalf of the college.

Bailey also recognized the Study Abroad Scholarship Awards Committee for its work in evaluating the hundreds of scholarship applicants for study abroad programs. The scholarships are awarded to Texas Tech students on a competitive basis. The committee reviewed 396 applications for the 2011 summer and fall semesters. Of summer applicants, 75 percent received an award and 73 percent of fall students received an award. For the first time in its history, Texas Tech will send more than 1,000 students abroad during the 2010-2011 academic year.

The annual Global Vision Award, first given in 2003, was created to recognize a faculty member, administrator or organization whose contributions inspired students to study and experience cultures abroad. It has since expanded to recognize a broader achievement in promoting campus internationalization.