Katharine Hayhoe answered questions about the impacts of climate change at a town hall meeting at Yale University. 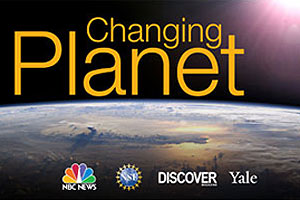 The show will air during The Weather Channel’s special “Green is Universal” coverage on Friday. Courtesy: NBC News-NBC Learn

A Texas Tech climate researcher will appear this Earth Day (April 22) in “Discover Magazine: Changing Planet,” a show also co-sponsored by the National Science Foundation. The show airs on The Weather Channel.

Katharine Hayhoe, an associate professor in the Department of Political Science, serves as a panelist on the show, which chronicles a town hall meeting at Yale University’s Kroon Hall and offers students the opportunity to ask questions about how climate change may affect people’s lives. NBC News’ special correspondent Tom Brokaw moderated the event.

“The purpose of the town hall meetings was to address questions about the impacts of climate change – how is it already affecting us today,” Hayhoe said. “The students were asking very good questions. They were thinking about it in the context of their lives. They wanted to know why it matters and what can we really do about it rather than vague ideas kicked around in the media. It brought the issue of global climate change down to a personal level.”

During the meeting, about 100 local high school and Yale students focused on how climate change affects health, the economy, religious values and today’s youths. Hayhoe said climate change already is affecting our lives, whether we realize it or not. As years pass, it will alter the characteristics of the places people live and affect the availability of important resources, including water and food.

Hayhoe has led climate impact assessments for California, the Northeast, Chicago, and also contributed to the United Nations Intergovernmental Panel on Climate Change. She was a lead author on the 2009 national report initiated by the White House to evaluate climate change impacts on the United States.