The Pom Squad clinched 13th place in its division. 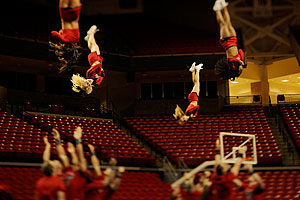 The Cheer Squad finished with a final score of 9.675.

The Cheer Squad, coached by Joshua Anderson, finished with a final score of 9.675, and was edged out by the squad from the University of Louisville.

The Texas Tech Pom Squad clinched 13th place in its division with a preliminary score of 9.121. The team is coached by Bruce Bills.

More than 270 teams from across the U.S., Canada, Costa Rica and Japan competed for an NCA or NDA title.

Stephanie Rhode, assistant director in the Center for Campus Life, said getting to Daytona Beach and placing among the top teams is much more difficult than it appears.

“Just qualifying to get to this contest is a big deal, because an invitation from NCA/NDA is required to even go to the national competition,” Rhode said. “Many teams that get invited don’t even make the trip, because they know they ultimately are not competitive enough.”

Texas Tech’s squads qualified at the cheer and pom camp last July hosted by the University of Kansas.

Ten Professors Awarded for Going Above and Beyond