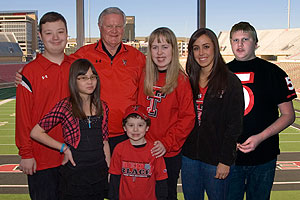 Texas Tech’s Burkhart Center for Autism Education and Research will host its annual Walk for Autism Awareness from 2 to 4 p.m. April 17 at Jones AT&T Stadium.

Gerald Myers, the former Texas Tech athletic director, joins the sixth annual event as this year’s honorary walk chairman. Janice Magness, director of the Burkhart Transition Academy, which is housed in the Burkhart Center, said the purpose for the walk is to help educate the public about autism, the fastest-growing developmental disability in the country.

“With so many people being diagnosed, it is imperative that everyone is educated about the facts of autism and how to help families living with diagnosed individuals,” Magness said. “It is not a death sentence. People living with autism can and do have normal lives.”

According to the Centers for Disease Control and Prevention, Autism affects 1 in 110 Americans and every year out of 4 million children in the United States, approximately 36,500 children will eventually be diagnosed with Autism.

Magness said proceeds and donations raised at this year’s walk will go toward funding a new building for the center.

“Exciting plans are underway for the Burkhart Center to have its own free standing building that will house outpatient therapy and family consultation rooms, a full-inclusion preschool and the Transition Academy,” Magness said. “It will also feature a coffee shop where students attending the academy can be trained on how to run a business.”

The Burkhart Center, named for Jim and Jere Lynn Burkhart who have made significant contributions to the establishment and its mission, opened in October 2005. The center provides services for individuals with autism spectrum disorders, their families and the professionals who work with them to improve their quality of life.

Walk-up registration begins at 1:30 p.m. April 17. The first 1,000 individuals to enter the stadium will receive a free T-shirt.