Four Texas Tech University biologists, including one who was the first American scientist to study the area, say that all species of plants and animals that should be there are there. 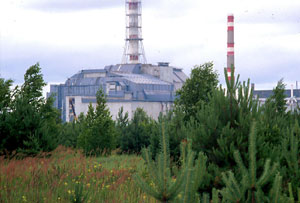 Despite the scars that remain 25 years after the Chernobyl nuclear plant disaster on April 26, 1986, this corner of Ukraine looks more like pristine, untouched wilderness.

Four Texas Tech University biologists, including one who was the first American scientist to study the area, say that all species of plants and animals that should be there are there. No species got wiped out completely. None decided never to return.

That fact begged an important question to these researchers. Why are plants and animals are so prolific here? After all, the site of the world’s worst environmental disaster was slated to become a nuclear desert, according to the May 12, 1986, issue of TIME.

Only Chernobyl’s ruined reactor and abandoned buildings from the city of Pripyat and surrounding villages testify to the human catastrophe that ensued as people were evacuated. However, witnessing nature’s return to the area, these scientists say it appears that normal human activities associated with agrarian society are more destructive than the world’s worst nuclear meltdown.

Though their research has found no evidence of genetic mutations due to the radiation, much remains to be learned from the disaster, and a more cooperative, organized approach should be taken to discover its impact, they say.

For Interviews and More Information

Visit chernobyl.ttu.edu for more on this story. Contact John Davis, senior editor, at (806) 742-2136 or john.w.davis@ttu.edu to set up a time to interview the researchers.

Ron Chesser, director for the Center of Environmental Radiation Studies at Texas Tech University, was the first American scientist allowed into the exclusion zone in 1992. His experience and research includes biological ramifications on wildlife and mapping the plumes of radiation in the Red Forest. He can discuss how radiation has impacted the environment and how nature has rebounded.

Robert Baker, Horn Professor of Biology and director of the Natural Science Research Laboratory, joined Chesser’s work in 1995, and did research on bank voles, a rodent living in the hottest irradiated zones at Chernobyl. He also can discuss recent research that suggests some exposure to radiation may actually help some wildlife live longer than without, and why there are broad discrepancies between Texas Tech’s findings and those of other organizations.

Brenda Rodgers, assistant professor of biology, used her research at Chernobyl for her dissertation when earning her doctorate. She can discuss how her scientific research into biological ramifications of the radiation overturned some preconceived notions she had about what researchers would find regarding the radiation’s impact on genetic mutation as well as the need for more research in this area.

Carleton J. Phillips, professor of biology, can discuss how the Chernobyl site and city of Pripyat have been used by Texas Tech University to train the next crop of scientists in the United States and Europe as well as a tool for extending diplomacy through science as Iraq rebuilds its scientific infrastructure.