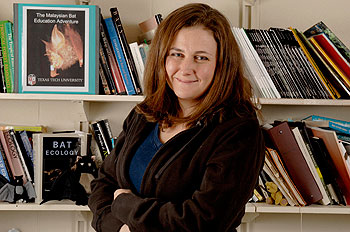 Kingston said the funds will help formalize the SEABCRU, a group that shares data, design and implementation of conservation methods, among other things.

A Texas Tech bat researcher recently received a five-year, $500,000 grant from the National Science Foundation (NSF) to create a network for bat researchers in Southeast Asia.

Funding will allow researchers to share data, design and implement conservation methods, collect and share data and use their research as a teaching tool for undergraduate and graduate students.

Tigga Kingston, an assistant professor of biological sciences, serves as the lead investigator on the project. She said the funds will help formalize the Southeast Asian Bat Conservation Research Unit (SEABCRU), a group formed in 2007.

“About three or four years ago, I set up the SEABCRU informally with colleagues doing bat conservation throughout Southeast Asia,” Kingston said. “Thanks to the funding from NSF, we’ll be able to take that informal network and make it a much stronger and more formal entity.”

The work is funded by the NSF’s Research Coordination Networks Program, which seeks to advance a field or create new directions in research or education. Groups of investigators are supported to communicate and coordinate their research, training and educational activities across disciplinary, organizational, geographic and international boundaries.

Southeast Asia is home to about 30 percent of the world’s bat population, she said. However, rapid land-use changes and intensive hunting have put many species on threatened or endangered status. Of the 330 bat species in the area, only about 18 percent are considered stable. By the end of this century, 20 percent of Southeast Asia’s bat species may become extinct, Kingston said. 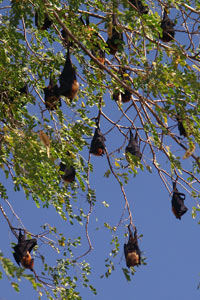 Because of the importance of bats as pollinators, seed dispersers and agents of pest control, this dramatic loss of bat diversity could wreak havoc on this area of the world.

Because of the critical ecosystem services that bats provide as pollinators, seed dispersers and agents of pest control, this dramatic loss of bat diversity could wreak environmental and economic havoc on this area of the world.

“Bats are a critical component of the ecosystem,” she said. “In the rain forests of Malaysia, for example, they can make up to 50 percent of the mammal species. In the forests, they are seed dispersers for forest regeneration and they are pollinators of plants. Besides pollinating durian fruit, which is a $1.5 billion-a-year industry, they also help pollinate or disperse 200 types of plants that make about 500 products across Southeast Asia.”

SEABCRU has identified four critical areas of interest in flying fox and cave bat conservation, taxonomy and the response of forest-dependent bats to rapid land-use change. The money will support meetings and training workshops across Southeast Asia centered on these research priorities. The first meeting will coincide this June with the 2nd International Southeast Asian Bat Conference that Kingston is organizing with SEABCRU colleagues in Java, Indonesia.

The funding also will help to create a new website where researchers can pool data together. Participants will be able to map where imperiled bat populations reside, assist with the development of experimental modeling systems, upload capture data and chat with other bat researchers about issues and findings.

Also, undergraduate and graduate students will have the opportunity to participate in the research, she said.