Greek Build offers the opportunity to showcase organizations' values of philanthropy and service. 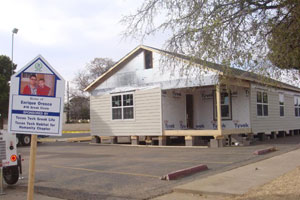 The week-long project is focused on constructing a home for a local family in need.

Texas Tech’s four Greek councils, Interfraternity, Multicultural Greek, National Pan-Hellenic and Panhellenic, are collaborating with the Texas Tech and Lubbock Habitat for Humanity organizations for the 2011 Habitat for Humanity Greek Build. The week-long project is focused on constructing a home for a local family in need.

Greek Build will kick off at 3 p.m. and last until 9 p.m. daily March 22-24. The schedule will change at noon March 25 when Greek Build begins its around-the-clock work that will conclude at 3 a.m. March 27. All construction will take place at Pi Kappa Alpha’s parking lot at 20 Greek Circle, or between the Pi Beta Phi and Delta Tau Delta houses.

The family receiving the finished home is Jessica Dias and her three children, Alexandra, Isabella and Sebastian. They will be moving out of Dias’ mother’s two-bedroom house, where she and the two girls share a bed while her son sleeps with his grandmother. After the completion of the house, it will be moved into the neighborhood where they now live.

Megan Robare, unit coordinator for the Center for Campus Life, said the project is a great opportunity to unify the entire Greek community in a student-driven philanthropic endeavor.

“It’s remarkable to see the Greek community set a common goal exemplifying their passion and commitment to service and then reach that goal,” Robare said. “Greek Build offers men and women the opportunity to showcase their organizations’ deep-rooted values of philanthropy and service by giving back to the Lubbock community.”

Sandy Anderson, executive director of the Lubbock Habitat, said the students of Greek organizations bring a different dynamic to the table.

“I enjoy seeing and being part of the energy the students bring. I think they certainly leave their mark on the community as well as the family they are helping. They not only raise money, but also take pride in serving a community that most live in for only four years,” Anderson said.

Greek Build has raised about $50,000 along with the leftover funds from the 2009 build. A closing ceremony to present the house to the family will take place at 6:30 p.m. March 28 at the construction site.