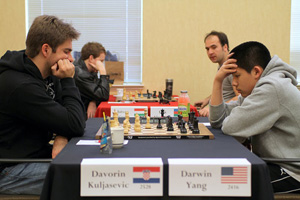 Darwin Yang and Davorin Kuljasevic were tied for first place going into the final round of the tournament.

While many students were away on Spring Break, an intense battle took place in the English and Philosophy Building at Texas Tech. And when it was over, two teenagers made chess history.

Darwin Yang, of Plano, is now the youngest International Master in Texas Chess history. At age 14, he earned the title at the 2011 SPICE Spring Invitational upon defeating Harvard's former number-one player, International Master Marc Esserman. Their match lasted more than four hours in the eighth round.

Hosted by the Susan Polgar Institute for Chess Excellence at Texas Tech, the 2011 SPICE Spring Invitational is one of the strongest tournaments held in the U.S. so far this year.

"It is extremely rare to earn all the norms from the same place, but Yang earned all three norms right here in West Texas, on the campus of Texas Tech," Polgar said.

Going into the final round, three players were tied for the lead: Yang, 15-year-old International Master Daniel Naroditsky and Grandmaster Davorin Kuljasevic, a Texas Tech graduate student and captain of the Knight Raiders A team.

Kuljasevic was the only player to remain undefeated in the end. He and Naroditsky tied for first, with Yang just half a point behind.

Naroditsky is the youngest player in history to either win or tie for first at a SPICE International Invitational event.