The chapter was named as an Outstanding SPS Chapter as well as a second consecutive Marsh W. White Outreach Award winner. 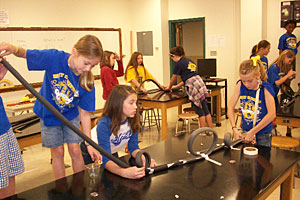 Texas Tech’s Chapter of the Society of Physics Students (SPS) has been selected for two awards from the American Institute of Physics (AIP).

The chapter was named as an Outstanding SPS Chapter for the 2009-2010 academic year as well as a second consecutive Marsh W. White Outreach Award winner.

“The current SPS student leaders have worked very hard to make their student organization successful and to attract as many physics majors and minors as possible to planned activities,” said Roger Lichti, chairman of the Department of Physics. “It’s always very satisfying to have student efforts recognized at the national level, whether it’s for academic success or for such student organization activities and outreach efforts.”

The Outstanding SPS Chapter award is granted only to SPS chapters that demonstrate their success by promoting and getting involved in variety of activities, said Sung-Won Lee, assistant professor of physics and faculty advisor to the chapter.

“Our chapter is honored to have received these awards,” he said. “These two awards are direct recognition of the magnificent work the Texas Tech chapter of SPS has been doing, and it has been recognized nationally. We are one of the most active chapters in the nation, and we are one of the nation's best in physics undergraduate activity. It is my great pleasure to be associated with these young physics students at Tech.”

Texas Tech’s SPS is one of 50 schools recognized with an Outstanding SPS Chapter award from the about 700 chapters across the United States. Fewer than 10 percent of SPS chapters nationwide receive this recognition.

Gary White, the director of the SPS national program for the AIP, awarded this honor to the SPS chapter based on the depth and breadth of SPS activities conducted by the Texas Tech chapter in such areas as physics research, public science outreach, physics tutoring programs, and hosting and representation at physics meetings, among others.

The chapter also received the 2011 Marsh W. White Outreach Award from the AIP to help fund an outreach project titled “Physics Flying Circus.” The Marsh W. White Awards are made to the SPS chapters to support projects designed to promote interest in physics among students and the general public.

“With the Marsh W. White Awards, our chapter can continue to support our science outreach projects to promote physics awareness to K-12th grade students and the community,” Lee said.

The awards, which were first made in 1975, were named in honor of Marsh W. White for his long years of service to Sigma Pi Sigma.