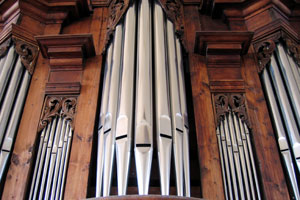 Local organists, faculty and students will perform at the annual Town Hall Organ Recital in Hemmle Recital Hall at the School of Music.

The concert will feature multiple performers, each playing selections of their choice. The musicians will cover music ranging from the era of J.S. Bach to contemporary composers – highlighting the tonal capabilities of the Holtkamp organ.

The Holtkamp is the only performance pipe organ at Texas Tech. The instrument was installed when the recital hall was built. American organ builder Walter Holtkamp originally built the instrument for the Oberlin Conservatory of Music. The instrument was then acquired by Texas Tech through a gift from Tommye A. Moss of Odessa, and it has served the Lubbock community for more than 33 years.

Today, the Holtkamp pipe organ is in need of serious renovation, rebuilding and expansion of its capabilities to provide a more substantial bass and a wider dynamic palette. The organ has gone without a complete overhaul since it was installed in 1977, which puts it at risk of becoming completely unplayable.

The growth of ensemble size calls for a new style of organ which has a richer sound and is more capable of blending with, or leading the orchestra. The School of Music plans to restore the Holtkamp by expanding its tonal palate and modernizing its features so that the instrument will be more versatile.

Looking at Lubbock Through a Camera Lens