The grants are among 22 cancer prevention initiatives totaling $11 million. 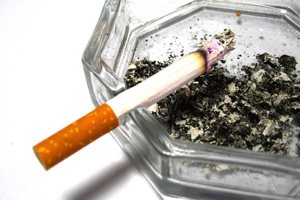 Researchers plan to provide training to other health care professionals and brief interventions with patients during medical visits.

These grants are among 22 cancer prevention initiatives totaling $11 million, which were awarded to Texas universities and public health agencies in January. Each funded project aims to take a proactive approach to cancer prevention or early detection.

A $299,000 grant will help train physicians to become more successful in helping their patients who want to successfully quit smoking. The program also will seek to create local pathways that unite aspiring quitters with mental health and addiction specialists, said Lee Cohen, lead investigator on the project and an associate professor of psychology.

"Many times, physicians don't realize the impact they can have on their patients simply by saying to them, 'Quitting smoking is the single-most important thing that you can do to improve your health,'" Cohen said. "The problem is that physicians do not always encourage their patients to quit, and when they do, they do not necessarily know where to refer those who need additional help. The idea behind our project was to create a one-stop shop model where we, the psychologists, can do some training with physicians and other health care professionals regarding smoking cessation. That way, physicians may feel more confident about delivering such treatments."

"In addition to providing training to other health care professionals, we also plan to offer brief interventions with patients during medical visits or even offer individual therapy in cases that require it. We plan to run smoking cessation support groups through the medical clinics in which these patients are being served so there's a referral system in place right there in the offices. This is an integrative training model to get communication across disciplines that's based on the current clinical practice guidelines."

Cohen said an estimated 435,000 Americans die annually from smoking-related deaths. It costs as much as $200 billion in health care costs and productivity losses.

The program could provide training to doctors across the region who reported a combined 88,000 patient visits annually, according to the grant proposal. If effective, the grant could help hundreds or thousands of Texans quit smoking.

A second $295,000 grant will go toward a program to promote healthy eating habits in rural communities as well as promote other cancer-preventing activities, said Conrad Lyford, an associate professor in the Department of Agricultural and Applied Economics and the lead investigator for the project.

Residents in rural communities will be taught how healthier diets can assist in fighting certain cancers as well as the importance of using sunscreen and smoking cessation.

"There have been studies in a number of other communities that show that a community effort to raise awareness about cancer as well as increasing people's activities in cancer prevention can reduce cancer," Lyford said. "You know, 50 percent of the cancer people get is preventable. We want more people to prevent those cancers. This type of community intervention has been done in other areas, but not in a rural community. So, many people will be watching this, and hopefully we'll have a measurable and sustainable impact."

CPRIT was created in 2007 after Texas voters approved it. The organization will award some $3 billion in cancer initiatives over the next decade. Its goal is to expedite innovation and commercialization in the area of cancer research and to enhance access to evidence-based prevention programs and services throughout the state.

Debate Qualifies for the National Parliamentary Tournament of Excellence