The event will be held at 7 p.m. April 15 at the Lubbock Memorial Civic Center. 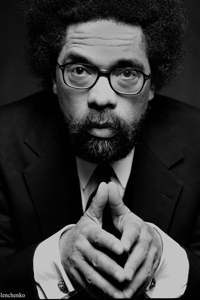 Cornel West is an educator in the Center for African American Studies and Department of Religion at Princeton University.

Cornel West, educator in the Center for African American Studies and Department of Religion at Princeton University, will serve as the keynote speaker for the ninth annual Mentor Tech Banquet. The celebration is set for 7 p.m. April 15 at the Lubbock Memorial Civic Center.

West is a published author who has written 19 books and edited 13 others. He is best known for "Race Matters," "Democracy Matters," and his memoir, "Brother West: Living and Loving Out Loud." He frequently appears on the Bill Maher Show, The Colbert Report, CNN, C-SPAN, and can be heard weekly on the Smiley & West radio program that features stimulating dialogue on news, politics, entertainment and culture.

Cory Powell, associate director for Mentor Tech, said the program tried to get West to speak at the banquet in 2004 but the educator's schedule did not permit.

"I'm thrilled to have Dr. West, an iconic figure within academia as our speaker this year, and we are sure those who attend will leave enlightened and inspired by his words," Powell said.

"Our banquet provides an opportunity to celebrate the accomplishments of our students and recognize our mentors for their participation," he said.

Mentor Tech, a component of the Cross-Cultural Academic Advancement Center, is a retention program that promotes academic workshops and campus and community involvement of students from underrepresented groups. The program is named after Lauro F. Cavazos, the first alumnus to serve as president of Texas Tech and Ophelia Powel-Malone, the first African American undergraduate of the university.

The program, housed in the Division of Institutional Diversity, Equity, and Community Engagement, began in 2002 with 45 students and more than 100 mentors from the university faculty and staff. Mentor Tech has grown to nearly 500 participants today.

Tickets for the banquet are $45 each and $450 for tables of eight. Tables at $650 will also include passes to a VIP reception with Professor West. Proceeds benefit the Mentor Tech scholarship fund.

Call the office of Mentor Tech at (806) 742-8692 for more information about the event and to purchase tickets.

Texas Tech a Launching Pad for a Pulitzer Prize Winner