This is the seventh consecutive year the Red Raiders won the competition. 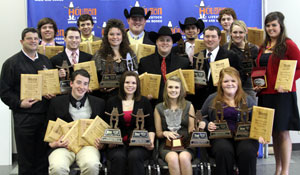 Texas Tech's meat judging team walked away with first and third place honors March 6 at the Houston Livestock Show's Intercollegiate Meat Judging Contest. This is the seventh consecutive year the Red Raiders have won the competition in Houston.

"I'm very proud of the commitment of these students this spring," said Mark Miller, Horn Professor and San Antonio Livestock Show Distinguished Chair in Meat Science. "We are very blessed to have such a deep team this year with seven of the top 11 scores in the contest being Tech students."

The team is coached by Meat Science Graduate Student Shanna Ward and Miller.

This was the last contest of the spring for the 2011 team. The students will compete at four more contests during the fall semester, as well as an international competition in Australia this summer.

Expert Discusses The 1966 Batman Movie and Why it Matters