The team brought home their second win of the spring. 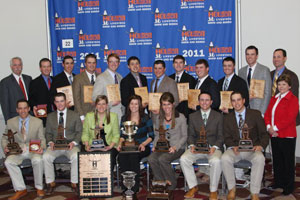 The team distanced themselves from their nearest competitor, Texas A&M, by 16 points.

In the alternate division, Texas Tech also boasted three of the top-ten individuals. Tanner Kieschnick, a junior from Vernon, was second-high. Clayton Gardner, a junior from Estancia, N.M., was fourth-high, and Nathan Pond, a junior from Wolfforth, was fifth-high.

"I'm very proud of the hard work the team has put forth this spring," said the team's Coach Ryan Rathmann, an assistant professor in the Department of Animal and Food Sciences. "This is a very talented group, and I'm excited to continue working with them this fall."

In addition to Rathmann, the team is coached by graduate student Bryan Bernhard.

The team will continue their season next fall at competitions across the United States including Kansas City, Mo., and Louisville, Ky.