Keeping the Throne: Texas Tech Mayors on Being at the Top 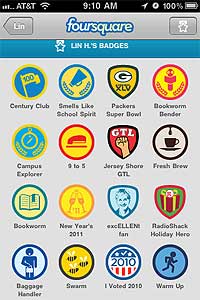 The Student Union Building (SUB) is one of the busiest places on Texas Tech’s campus and as the reigning mayor of the SUB, Christine Self is more than aware of what it takes to keep the throne.

“Being mayor is a big responsibility,” she said. “You have to remain eternally vigilant or you’ll be ousted.”

Self is referring to the online social networking game Foursquare, which bestows the title of mayor to the person who has the most “check-ins” to certain venues such as restaurants, bars, grocery stores and places all over the Texas Tech campus.

After seeing Texas Tech’s posts about Foursquare on Facebook, Self said she thought she would check it out. “I keep using it because it’s fun and I like seeing the specials and tips for places where I check in,” she said.

The Texas Tech campus has taken full advantage of this social media phenomenon by having rewards, incentives and “badges” for users who check-in at certain locations. For those that are familiar with this game know the sense of accomplishment associated with the desirable crown of mayor.

Christine Self, mayor of the SUB.

According to Lin Humphrey, a marketing doctoral student, graduate assistant and mayor of the Rawls College of Business, Foursquare has had 4,000 percent growth since its launch in 2009. With a background in interactive marketing, Humphrey said Foursquare is one of his favorite apps.

Lin Humphrey, mayor of the Rawls College of Business.

Foursquare works by using a GPS to locate nearby businesses and buildings. The user then checks in by using the Foursquare app, and they can also choose to share their location with friends by sending a check-in message to their Twitter and/or Facebook accounts.

Foursquare Goes Above and Beyond the Others

“The phones are getting smarter, faster, they’re getting stronger and the GPS is getting better,” Humphrey said.  “I think Foursquare has just gone above and beyond the others.”

Kaley Daniel, a past mayor of the Texas Tech Library and the reigning mayor of the TTU - SUB – Mailing Services Center, said the fresh, call-it-like-you-see-it tips open a whole new window to what Texas Tech’s audience perceives and receives while at the library. Daniel is the director of communications and marketing for Texas Tech University Libraries.

Kaley Daniel, past mayor of the Library.

“As a professional communicator, I was intrigued by the ability to both reach our audience with our messaging in a new way within the library, as well as be able to see how they share their experiences while in our building,” Daniel said.

On Texas Tech’s campus, the university itself has more than 10,000 check-ins. The Student Union Building is the most popular place on campus with more than 5,500 check-ins by 891 different users. The Rawls College of Business and Robert H. Ewalt Student Recreation Center are also popular destinations on campus.

With the helpful tips, useful specials, and unique badges, Texas Tech students have a VIP social networking pass to the 88-year-old campus. 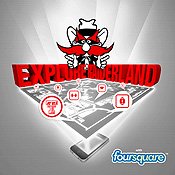 Foursquare is a mobile app that makes the Raiderhood more interesting to explore. Its a friend finder, a social guide and a game that challenges users to experience new things and rewards them for doing so. Players can compete with friends to become mayor of various locations and venues.

If you check in more frequently than anyone else, you claim bragging rights as the mayor of that venue. You also can earn extra points by being the first to post a visit to a new location, by making frequent visits or by sharing new information about locations or activities.

As an added bonus, foursquare users receive tips and specials when they check in to a location.

Looking at Lubbock Through a Camera Lens