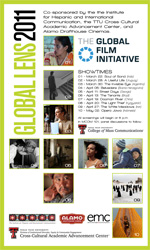 All screenings begin at 6 p.m. in Room 101 of the Mass Communications building at the northwest corner of Memorial Circle. Admission is free, and after each screening a panel of interdisciplinary scholars from the Texas Tech faculty will give brief remarks on the film and open discussion with the audience.

Susan Weeks Coulter, board chair of the Global Film Initiative, said the films broadcasted will be a unique experience.

"This year's lineup really does break new ground for the series," said Coulter. "The films are unusual and intriguing, wildly creative, experimental at times and quite different from previous editions of Global Lens. We're thrilled to be screening them at Texas Tech."

Global Lens is an annual touring film series launched in 2003 to support the distribution of cinematic works from around the world. This marks the third year the series will play at the College of Mass Communications. This year, the series is made possible by contributions from the Texas Tech Institute for Hispanic and International Communication, the Texas Tech Cross-Cultural Academic Advancement Center and the Alamo Drafthouse Cinemas.

Global Lens 2011 Trailer from The Global Film Initiative on Vimeo.

The film titles and dates are as followed: