'Fight for the Scarlet and Black'

Red and black a long-standing tradition at Texas Tech. 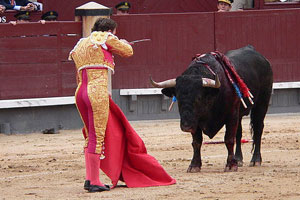 The Matador uses his long red cape to attract the bull's attention.

March 16, 1926 forever shaped Texas Tech as the students of the university adopted the nickname Matadors and the school colors scarlet and black.

The idea first originated from Mrs. Ewing Young Freeland, the football coach's wife. After the Fort Worth Star-Telegram wanted to nickname the university "Dogies", she took matters into her own hands. The recommendation of being known as the Matadors came from the Spanish influence on the Texas Tech campus.

In 1936, the nickname "Matador" faded out as the "Red Raiders" became popular. However, even with the name change, the colors scarlet and black have endured throughout the years.

Watch the video to see what people across campus think of red and black.

What does red and black mean to you? Let us know in the comments below!