Expert Discusses the 1966 Batman Movie and Why it Matters

Texas Tech associate librarian is an expert in comics and pop culture. 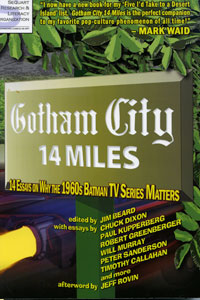 In a world of big budgets, elaborate makeup and computer-generated imagery, it is important not to discount the simple masks, colorful villains and "POW!" of the 1966 Batman movie. It was the movie to see that summer, and a milestone in super-hero and sequential art films, according to Texas Tech associate librarian and pop culture expert Rob Weiner. And his opinion is not unique.

In the recently published "Gotham City 14 Miles: 14 Essays on Why the 1960s Batman TV Series Matters," Weiner noted the film's clever dialogue and one-liners in an essay titled "Theatre of the Absurd: The 1966 Batman Movie." He also pointed out the characters running about Gotham City, including men in colorful tights, as if this was an everyday occurrence. Holy Spandex, Batman!

"Part of the appeal, are the characters' abilities to poke fun at themselves," Weiner said. "It was obvious the cast was having a good time."

Weiner explains that the movie originally was meant to hit the big screen before the television series, but ended up the other way around. The film came after the first season aired, which only fueled Batmania even more.

At a time when Batman had taken a dark turn through actor Christian Bale, Adam West's interpretation had more of a James Bond-like charisma that appealed to the fun-lovers within. Not to mention, he came complete with all the necessary gadgets. 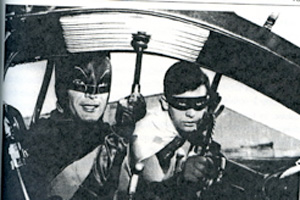 Batman and Robin preparing to fight the enemies.

"Batman also seemed to have just the right weapon in any given situation," Weiner said. "The 1966 movie gave us the Batcopter, Batboat, Batmobile, Batcycle... Let's face it, it's just plain cool."