Students headed to Mexico for Spring Break should be aware of a U.S. State Department-issued Travel Alert. 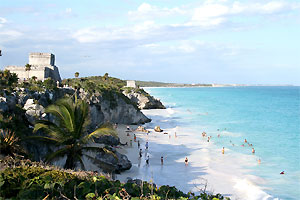 The Texas Department of Public Safety is urging Spring Breakers to avoid traveling to Mexico because of continued violence and reminding boaters to stay on the U.S. side of Falcon Lake.

With Spring Break set for March 14-18, many students are planning trips to Mexico. If you are among them, please be aware the Texas Department of Public Safety and the U.S. State Department have issued Travel Alerts for Mexico.

The Texas Department of Public Safety is urging Spring Breakers to avoid traveling to Mexico because of continued violence and reminding boaters to stay on the U.S. side of Falcon Lake.

Falcon Lake has been the scene of several robberies and a U.S. citizen’s murder, and DPS is again warning boaters to steer clear of the Mexican side of the lake. Cartel activity remains high in that area.

“While drug cartel violence is most severe in northern Mexico, it is prominent in other parts of the country as well,” said DPS Director Steven C. McCraw. “Various crime problems also exist in many popular resort areas, such as Acapulco and Cancun, and crimes against U.S citizens often go unpunished.”

So far this year, an Immigration and Customs Enforcement agent was killed and another injured in a suspected ambush near San Luis Potosi Feb. 15.  Two El Paso teens were gunned down February 5 in Ciudad Juarez.  In January, a Texas missionary was shot in the head when she and her husband ran an illegal road block in Nuevo Leon.

In addition to U.S citizens killed so far this year, preliminary figures show as many as 65 Americans were killed in Mexico in 2010.  Kidnapping, sexual assault, robbery and carjacking also are threats in parts of Mexico. Suspects have not been prosecuted in many of the cases. Meanwhile, more than 30,000 Mexican citizens have died in drug-related violence since 2006, and the violence shows no signs of abating.

DPS acknowledges that many travel to Mexico without incident, but the risks cannot be ignored. Travelers are encouraged to carefully research any planned trips.

Travelers should always check the U.S. State Department website for the most up-to-date information related to security issues in Mexico.

U.S. citizens living or traveling in Mexico are urged to register with the nearest U.S. Embassy or Consulate through their website at https://travelregistration.state.gov/ibrs/ui/.