Debate Qualifies for the National Parliamentary Tournament of Excellence

This is the second year in a row three teams have qualified for the tournament. 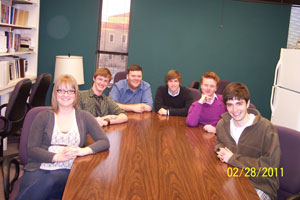 Texas Tech is the only school to have five non-senior debators in the competition. From left to right: Lauran Schaefer, Jack Seymore, Paul Williamson, Tyler Cashiola, Sean Riegert, Joey Donaghy

For the second year in a row, the Texas Tech debate team has qualified three debate teams to the prestigious National Parliamentary Tournament of Excellence (NPTE), an invitational tournament open only to the top 64 debate teams in the nation out of 965 that have competed this academic year.

"The qualification of three teams to the NPTE is a huge achievement for this program," said Joe Gantt, head coach and director of forensics at Texas Tech. "Expectations were high, coming off a national championship in 2010, and these debaters not only met our expectations but exceeded them. We are positioned not only for success in this year's national tournaments, but we are also in great shape for years to come."

The three Texas Tech teams include:

Texas Tech is one of only three schools nationally to have three teams among the top forty. That accomplishment is more exceptional by the fac tof the youth of the debate squad; with only one senior among the qualifying debaters, Texas Tech is the only school to have five non-senior debaters in the competition.

The National Parliamentary Tournament of Excellence will be held at the University of Denver March 11-14. For more information on Texas Tech debate, contact Joe Gantt at (806) 742-1328.