Solas will perform at 7 p.m. April 8 at the Allen Theatre. 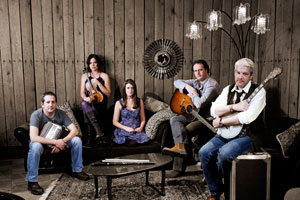 The Irish band Solas has many followers including rap producer Timbaland.

The band is best known for its varying mix of traditional and contemporary Irish music – playing songs such as Woody Guthrie's "Pastures of Plenty" and Bruce Springsteen's "Ghost of Tom Joad" as well as customary jigs and reels.

"The Irish band, Solas, is in a class all its own," said Jo Moore, administrator of the College of Visual and Performing Arts' Presidential Lecture & Performance Series.

"They are technically brilliant musicians who can perform traditional Irish ballads or more contemporary genre-transcending selections. They are exciting to watch and compelling to listen to."

Celebrating its 15th anniversary, the ensemble has performed at many of the major Celtic folk festivals such as the National Folk Festival in Nashville, Milwaukee's Irish Fest and the Telluride Bluegrass Festival.

The ensemble also has a fan base including well-known musicians Bela Flack, Emmylou Harris and rap producer, Timbaland.

Through its blend of Celtic traditional, folk and country melodies, bluesy, jazz-inspired improvisations and global rhythms, Solas has created a unique repertoire in the world of Celtic music.

Tickets are $12 for general admission and can be purchased through Select-A-Seat by calling (806) 770-2000. Prices include a $3 Select-A-Seat service charge. Student tickets are free with a valid ID at the SUB information desk outside the Allen Theatre.