The presentation will take place at 7 p.m. March 30 at the Helen Devitt Jones Auditorium. 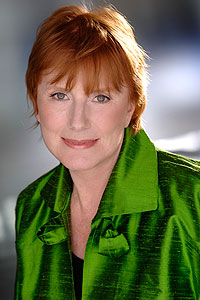 Celia Sandys has documented the life of her grandfather, Winston Churchill, in many novels.

She watched as they carried his stretcher onto the Royal Air Force plane chartered by the Prime Minister of Britain.

At almost 90 and fighting the pain of a broken hip, she knew her grandfather could be minutes away from dying.

Sitting silently by his side, she held his hand while she pondered the poignancy of this moment. This tired, 88 year-old man, had escaped from a South African prison during the Anglo-Boer war, became the only statesman to win a Nobel Prize for Literature, and most importantly, led Britain through the harsh times of World War II.

Politician, author, famously quoted leader – all words used to describe Winston Churchill. But to Celia Sandys, he was simply grandfather.

Sandys, the daughter of Churchill's eldest daughter, Diana, and Cabinet Minister Duncan Sandys, said she doesn't know why, but this moment with her grandfather stands out more than any other memory.

The granddaughter who inherited Churchill's fiery red hair will travel to Lubbock to share more memories of her grandfather at 7 p.m. March 30 at the Museum of Texas Tech Helen Devitt Jones Auditorium.

"Above all, he was my much-loved grandfather, and this was how I grew up," Sandys said. "We didn't grow up as children thinking of him as this important man. We grew up thinking he was our grandfather. And I think probably after World War II the only people who took him completely for granted were his grandchildren. Everyone else, even his children, were to some degree in awe of him."

When Churchill passed away, the Queen granted him the honor of a state funeral, which saw one of the largest assemblies of a world statesman in history. Sandys, 21 at the time, described this experience as a conflict of two worlds.

Publicly, millions of people paid homage to a lost leader, but Sandys mourned the loss as a granddaughter who loved Churchill on a different level. 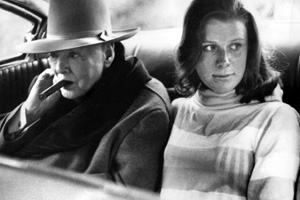 Celia Sandys on holiday with her grandfather in the South of France, 1962.

"It was a production, and it was extremely moving," Sandys said, "but perhaps it was more moving during the part of the day that wasn't in the public eye, when we got to the churchyard, because the rest of it was absolutely an incredible production."

Sandys said this private, moving experience was typical of all the moments she had with Churchill. Her memories of him are seldom marked by big events, interviews or cameras – she said they are characteristic of the memories many women have of their beloved grandfathers.

"He was very loving and a lot of fun," she said. "He certainly was a very warm character. He had lots of animals, so we used to all go out, and we'd feed the animals and do the sort of things that grandfathers like to do with their grandchildren. I think for him it was a big relaxation. We weren't asking him about politics, or to tell us what he thought of the war, or whatever it was – we were just happy to feed the animals. "

By the time she was old enough to ask Churchill about his accomplishments, Sandys said he was much older and she often preferred to treasure the time she had left with him.

She did not begin researching, writing and speaking about him until 18 years ago, yet because Sandys was able to draw from the times she spent her grandfather as well as the many journeys on which she accompanied him, she began with a solid foundation.

Sandys has since written five novels about Churchill, each one focusing on an area of his life that had not previously been covered. The first described Churchill as a boy and spanned the first 20 years of his life. She also wrote about his travels, his leadership, his time in South Africa and a short biography, which is now the official book of the Churchill Museum in London. 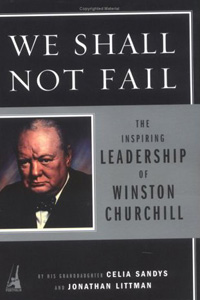 Her most recent book, "We Shall Not Fail: The Inspiring Leadership of Winston Churchill," describes the principles of leadership which enabled Churchill to lead his country to victory during World War II.

Another of Sandy's books, "Chasing Churchill," was the basis for a documentary which aired on PBS in the United States and the Discovery Channel in the United Kingdom.

While researching, writing novels, making the documentary and speaking all over the world, Sandys said she and her family have had the opportunity to almost relive Churchill's life – meeting people who once knew her grandfather and hearing stories which were passed down from generation to generation.

As time goes on, there are fewer and fewer people who actually knew Churchill, but Sandys said she still feels there are many more discoveries to be made.

"It convinces me that the journey's never finished," Sandys said. "There's always something more to learn and someone else to meet."

Similar to other revolutionary geniuses such as Thomas Edison and Albert Einstein, Churchill struggled as a student. As a teenager, he attended Harrow School, a boy's school near London, before taking three attempts to pass the entrance exam to the Royal Military Academy at Sandhurst. 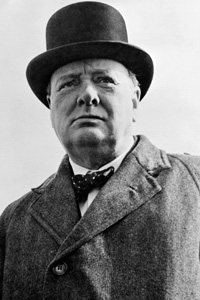 Photo courtesy of the Library of Congress

"He was a very human person." Sandys said. "He wasn't a good schoolboy. He wasn't a good pupil…He believed in himself, and I think one of the most important things is everyone should believe in themselves. If you can believe in yourself, then you can do so much more than if you don't."

Despite the difficulties he faced, Sandys said Churchill's conviction inspired him to persist. He became an army officer and saw action in several wars, including the Second Boer War where he began writing books and working as a war correspondent.

Churchill's writings helped him earn additional income as well as capture the attention of the public. His passion for success was growing increasingly more evident, yet it was a fellow officer who discovered Churchill's ultimate goal.

Sandys said Churchill was drinking in a bar in South Africa when some of his comrades began making jokes about his heroic accomplishments as a cavalryman in India. Without hesitation Churchill replied, "You mark my words, one day I shall be Prime Minister."

A little more than 40 years later, one of the officers to whom Churchill made this declaration opened his newspaper and said, "By Jove, he's done it."

Churchill had been appointed Prime Minister of Britain.

Sandys said this is one of two times it was documented Churchill made this proclamation – perhaps unaware he was predicting his own destiny.

"From an early age, he believed that he had been placed on this earth for a purpose," Sandys said.  "Of course, he didn't know quite where his destiny was going to lead him, but he was working towards where he ended up."

Sandys said Churchill's courage and perseverance inspired many people and enabled him to lead during difficult times. She said of all of his characteristics, she hopes she, too, will be remembered for these two qualities.

"He believed in being very simple," Sandys said. "He believed that courage was the greatest of all the virtues, so if you can be brave, then you can be brave in all sorts of different ways. It doesn't mean physical courage…but basically to have the courage to stand up for what you believe in. That's the most important thing."

She said she said still notices the words of her grandfather appearing in the speeches of politicians and the deliveries of world leaders during difficult times – Churchill's recycled words still giving inspiration more than 60 years after he spoke them.

"People can take any side of my grandfather's life, and they can use it as their example," Sandys said. "And it's not complicated because he wasn't a complicated person."

Although Sandys will one day be unable to share her grandfather's story, she knows he will not be forgotten. For as long as Churchill remains in the history books, his legacy will continue to provide encouragement.