A Comedy Empire: The Second City to Perform

The performance will be held at 7 p.m. on March 4 in the Allen Theatre. 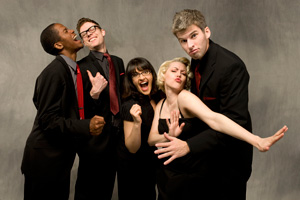 The show is titled "Fair and Unbalanced" and will focus on the troubles in today's society.

Joan Rivers, Steve Carell and Tina Fey are some of the many comedic performers The Second City has generated over the past 50 years.

The group will perform "Fair and Unbalanced," a show featuring sketches, songs and improvisations.

"The Second City will provide a humorous perspective on the troubles inherent in our everyday life," said Jo Moore, administrator of the College of Visual and Performing Arts Presidential Lecture & Performance Series. "No topic or subject is off limits. Patrons will delight in hilarious satire and quick-witted improvisation. If your parents asked you not to talk about a certain topic at the dinner table, chances are it will be made light of in this show."

The comedic ensemble got its start in 1959 in Chicago at an old Chinese Laundry and has since become what the New York Times labeled "a comedy empire."

"The Second City is celebrating more than 50 years of presenting cutting-edge performances across the globe," Moore said. "The performers that our patrons will see at Texas Tech March 4 will be the stars of tomorrow. Just look at the stable of famous alumni who have shared The Second City stage since the 1960s – the list reads like a who's who of American comedy."

Tickets are $12 for general admission and can be purchased through Select-A-Seat by calling (806) 770-2000. Prices include a $2 Select-A-Seat service charge. Student tickets are free with a valid ID at the SUB information desk outside the Allen Theatre.