Three third-year law students won the oldest and most prestigious moot court competition in the world. 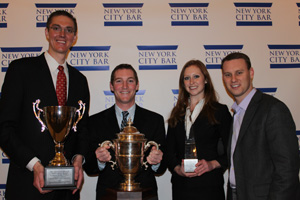 Texas Tech School of Law's Advocacy Program continues to prove it is among the nation's best with its third national championship this school year.

The team of third-year students Alexis Butler, Daniel Durell and Jason Jordan emerged from strong competition to claim the 2011 National Moot Court Competition championship on Feb. 3 in New York. This is the second time in the law school's history to win this honor, the last coming in 1980. In addition, Butler was named the nation's Best Oral Advocate.

The National Moot Court Competition is the oldest, and most prestigious, moot court competition in the world. It is administered by the New York City Bar Association's Young Lawyers Division and co-sponsored by the American College of Trial Lawyers (ACTL). Nearly 180 teams from 124 law schools entered the 14 regional competitions that took place in November, and 28 regional champions and runners up met in Manhattan for the national finals. Texas Tech defeated the team from the University of Tennessee's College of Law in the final round.

In another national competition, third-year student Kate Cross was recently named the nation's Best Advocate at the Andrews Kurth Moot Court National Championship Tournament, hosted by the University of Houston Law Center's Blakely Advocacy Institute. This was an invitation-only competition that featured the top 16 moot court programs in the country.

"I'm so proud of our amazing students who continue to do our school proud," said Rob Sherwin, director of Advocacy Programs. "This has been a banner year for our advocacy program, as these accomplishments mark our third national championship and fourth national best advocate award."

"Clearly, Texas Tech University School of Law continues to be an advocacy powerhouse," said Susan Saab Fortney, interim dean and Horn Professor. "Thanks to the team members and Coach Sherwin for their dedication and hard work."