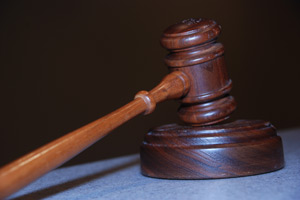 Law students are collecting victories at the regional and state competitions.

With notable victories in regional action at the National Trial Competition and Duberstein Moot Court Competition's Elliott Cup, the success continues in what is becoming another banner year for the Texas Tech School of Law advocacy programs.

"We had another fantastic weekend on the advocacy front," said Rob Sherwin, director of Advocacy Programs. "Both the National Trial team and the Duberstein team are excited about their next level of competition."

Texas Tech's National Trial Competition team of Jessica Adair, Adam Blanchard and John Muniz were crowned as champions of the Texas/Louisiana region. The top two winners of the 14 regional competitions will vie in the national rounds April 6-10 in Houston.

The National Trial Competition (NTC) is administered by the Texas Young Lawyers Association and was established in 1975 to encourage and strengthen students' advocacy skills through quality competition and valuable interaction with members of the bench and bar. One of the oldest and most prestigious mock trial competitions in the United States, the NTC is designed to expose law students to the nature of trial practice and to serve as a supplement to their education. Every ABA-accredited law school in the country is invited to this annual competition. 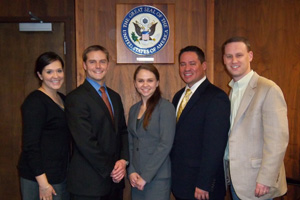 The regional rounds featured teams from every law school in the state of Texas as well as Tulane and LSU. Texas Tech defeated the University of Houston Law Center in the regional championship match before a panel that included federal Judge Marcia Crone of the Eastern District of Texas and David Beck, who Texas Lawyer Magazine has named one of the top 25 attorneys of the past quarter century.

The team was coached by alumna Rickie Cayton ('09), Professor Dick Baker, and alumnus Murray Hensley ('82) and is sponsored by alumnus Brian Loncar. This is the second-straight year the Texas Tech Law School has brought home a regional championship at this competition. 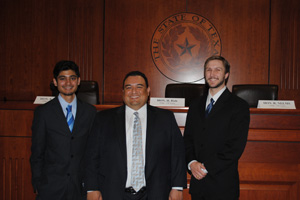 The Elliott Cup is sponsored by the Bankruptcy Section of the State Bar of Texas, and is named in honor of the late Joseph C. Elliott, U.S. Bankruptcy Judge for the Western District of Texas. The event includes law schools throughout the Texas/Fifth Circuit and is designed to serve as a formal practice competition for law school teams that will compete in the National Duberstein Moot Court Competition, March 5-7 at St. John's University School of Law in New York City.

"The level of competition within our state and region is the fiercest in the country, and so prevailing as the top team as well as having the top advocate is no small feat," said Coach Sherwin.