The award is given to members for their long-term contributions to the art and science of range management. 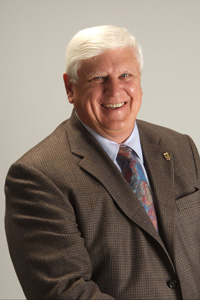 Ron Sosebee was presented a Sustained Lifetime Achievement Award for his long-term contributions.

A Texas Tech professor in the Department of Natural Resources Management was presented a Sustained Lifetime Achievement Award at the 64th Annual Meeting of the Society for Range Management in Billings, Mont.

Ron Sosebee, who's been involved in the growth and development of the range, wildlife and fisheries degree programs at Texas Tech for more than three decades, was honored with the award which is given to members for long-term contributions to the art and science of range management and to the Society for Range Management.

"In addition to his many professional achievements, Ron is a success in a much more fundamental and important way – he is a good person in the truest sense," said Ernest Fish, professor and former chairman of the department. "Along with what he offers students and faculty as a professional, they're better individuals because of what he gives of himself as a human being; and that's his most important achievement."

Sosebee joined the Texas Tech faculty in 1969 after completing his doctorate at Utah State University.

His awards include the W. R. Chapline Research Award from the Society for Range Management in recognition of his exceptional and sustained research accomplishments in range science and associated disciplines (2002); and he was designated as a Fellow of the Society in recognition of his service to the group and its programs in advancing the science and art of range-related resource management (1989).

Sosebee, along with his graduate students, has made significant contributions in research relating to brush management and mechanisms of herbicide actions in such noxious species as mesquite, silverleaf nightshade, and perennial broomweed, Fish said.

"He's one of the pioneers in the development of the field of ecophysiology of rangelands, helping develop the connection between plant physiology and ecology," Fish said.

Sosebee's research career was topped off with publication of the 700-page Society for Range Management treatise on physiological ecology and developmental morphology of wildland plants, for which he served as co-editor.

In the past, Sosebee's expertise in range science has been recognized by his participation in international programs, including activities in Peru, Argentina, Morocco, Canada, Mexico and China. He has advised 14 graduate students from foreign countries pursuing degrees at Texas Tech.