The Grammy award-nominated wind quintet will perform at 7 p.m. on Feb. 18 in the Allen Theatre. 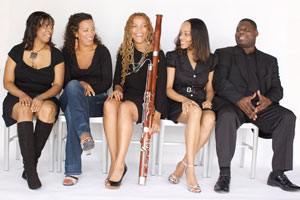 Since they began performing in 1997, the Imani Winds have held concerts at several of the country's major concert venues.

Performing since 1997, the quintet has become one of the most successful chamber music ensembles in the United States, known for its distinct dynamic playing and genre-blurring collaborations. With its two member composers, Valerie Coleman and Jeff Scott, the group seeks to enrich the traditional wind quintet repertoire while bridging European, American, African and Latin American traditions.

"Imani Winds shakes up preconceptions about the standard classical wind quintet repertoire," said Jo Moore, administrator of the College of Visual and Performing Arts Presidential Lecture & Performance Series. "Ensemble members are young and hip in their personal style and in their brand of music. To say they are exotic, exciting and innovative is not overstating their appeal."

The Imani Winds quintet has performed at several of the country's major concert venues such as Carnegie Hall and Lincoln Center in New York City and Kennedy Center in Washington, D.C. The quintet also has been featured on NPR, BBC, American Public Media, and has gained coverage in the New York Times and Wall Street Journal.

The group is currently working on a Legacy Commissioning Project, a five-year endeavor to launch Imani Winds into its second decade of music making. The ensemble is commissioning, premiering and touring ten new works for woodwind quintet with a wide array of composers to create new music.

The Imani Winds ensemble also will hold an outreach class titled, "The Art of The Spiritual" for area students and interested Texas Tech students from 10-11 a.m. Feb. 18 in the Hemmle Recital Hall. The class will feature:

Following the outreach class, the group will host a master class with the Texas Tech Woodwind Quartet from 11 a.m.-noon.

Tickets are $12 for general admission and can be purchased through Select-A-Seat by calling (806) 770-2000. Prices include a $3 Select-A-Seat service charge.Student tickets are free with a valid ID at the SUB ticket booth.