The meat, livestock and wool judging teams are taking the judging world by storm. 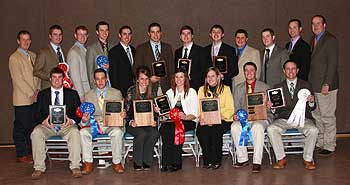 The Texas Tech judging teams are taking the judging world by storm.

"This was a great win for this talented group of students," said the team's coach, Ryan Rathmann, an assistant professor in the Department of Animal and Food Sciences. "I'm expecting them to keep working hard and perform even better at the next two contests this spring."

The team is coached by Rathmann and graduate student Bryan Bernhard.

The team has two contests remaining this spring, one at the San Antonio Livestock Exposition and another at the Houston Livestock Show and Rodeo. 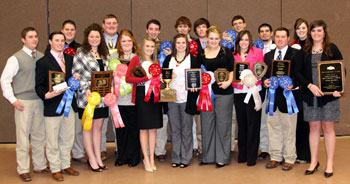 Texas Tech's meat judging team won first place Jan. 30 at the competitive Southwestern Livestock Show's Meat Judging Contest in Fort Worth. The contest, hosted by the American Meat Science Association in conjunction with the Fort Worth stock show, is the first win of 2011 for the 16-member team. The Red Raiders took the top spot by a 47-point margin and posting a score of 4,133 points. They finished first in the beef judging and overall beef. Other top finishers, in placement order, were South Dakota State University, Oklahoma State University, University of Wyoming and Kansas State University. Twelve universities participAated.

"This was an exciting win for the 2011 team," said Mark Miller, professor and San Antonio Livestock Show Distinguished Chair in Meat Science. "The group worked hard to earn their first win."

The team is coached by Texas Tech graduate student Shanna Ward and Miller and will compete again on March 5 at the Houston Livestock Show.

"I am extremely proud of the consistency we have developed in our judging program here at Tech," said Mark Miller, co-coach of the meat judging team and the San Antonio Livestock Show Distinguished Chair in Meat Science. "Each team is working hard to achieve excellence in their respective contests."

The National Western Stock Show began in 1906 and is one of the nation's oldest and largest shows with a prestigious history of judging contests. 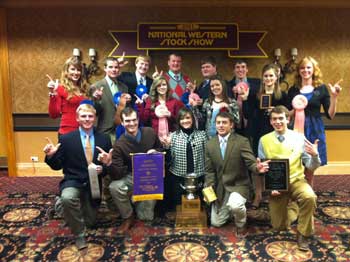 The Wool Judging Team was awarded champion honors and narrowly defeated the competition by one point to win the wool judging competition in Denver for only the second time since 1986. Texas Tech's other team finished fourth in the competition.

The team is coached by graduate student Aaron Jennings and undergraduate Craig Leonard.

The Meat Judging Team finished second to Colorado State University in their contest by a 27-point margin. The contest was held at JBS Swift in Greeley, Colo. The team is coached by graduate student Shanna Ward and Miller.