Imani Winds, a non-traditional wind quintet, is changing the face of chamber music. 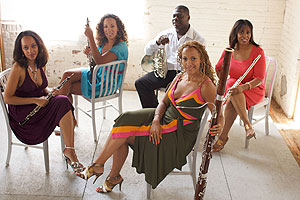 Imani, which means "face" in Swahili, became the groundwork for the members' objective to rediscover their cultural roots through music.

Mariam Adam describes the formation of Imani Winds as a chance encounter and a lot of phone calls. She and the group's flutist, Valerie Coleman, met during an Aspen music festival but never discussed their ambitions to form an all-Black, non-traditional wind quintet until they met again in 1997 while attending graduate school in New York City.

Adam, the group's clarinetist, and Coleman, began asking for recommendations and making cold calls to other musicians until they were able to locate an oboist, a bassoonist and a horn player – the three instruments necessary to complete the quintet.

Coleman came up with the idea to name the group Imani Winds. Imani, which means "face" in Swahili, became the groundwork for the members' objective to rediscover their cultural roots through music.

Fifteen years later, those five musicians are still making music together and attempting to change the face of chamber music through an evolving repertoire.

The Grammy Award-nominated and only full-time wind quintet in the world has entered its second decade of creating music and will make its West Texas debut at 7 p.m. Feb. 18 in the Allen Theatre at Texas Tech's Student Union Building.

"It took a couple of years for us to get our mission statement and our vision unified," Adam said, "but it's been the same people ever since, so we definitely found that synergy early on."

Adam said the Imani Winds musicians began breaking down barriers the moment they decided to form a chamber music group of color, but they each aspired for more – they wanted to create a repertoire far different from the traditional, European style of chamber music.

The members desired to combine their own interpretations of music with their cultural backgrounds to create a unique repertoire. By collaborating with underrepresented, non-traditional composers, they have expanded their musical capabilities as well as championed works that are considered standard for wind quintets.

With two member-composers, Coleman and Jeff Scott, the group has developed a broad collection of music during the past decade – bridging European, American, African-American and Latin-American traditions.

"We have distinct styles that we commit to," Adam said. "We learned tango with a tango master, we learned Middle-Eastern music with a Middle-Eastern master of Odin, and we learned jazz with some of the top masters. We don't stop learning so that the audiences can enjoy it more and also learn from our learning experience. This wall, the invisible wall that usually exists between classical performers and the audience just does not exist with us."

During its time as a group, Imani Winds has performed at several renowned concert venues such as Carnegie Hall and the Lincoln Center in New York City and the Kennedy Center in Washington, D.C. But Adam said the group's most memorable performances were with jazz phenomenon Wayne Shorter during a series of tours.

The five members of Imani Winds, honored by the opportunity to play with Shorter, named their most recent album "Terra Incognita" which means "unknown lands" after a song Shorter wrote. The group also included the song in its album and used it as the first in a series of Legacy Commissioning Project pieces.

Imani Winds began its Legacy Commissioning Project on its 10th anniversary with the goal of commissioning 10 composers during a five-year period. In its fourth year of the project, the group has surpassed its original target, but does not plan to stop any time soon.

"Every week is something new," Adam said. "Every week is a new experience. We play in concert halls in the most unassuming places that have the best performing experience that you would never expect." 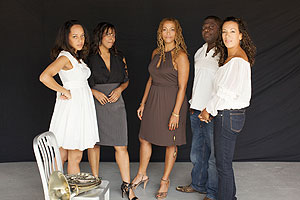 In addition to playing music, the Imani Winds members remain committed to musical education and give master classes to chamber music students during their tour.

In addition to playing music, the Imani Winds members remain committed to musical education and give master classes to chamber music students during their tour.

Adam said upon the formation of the group, Coleman emphasized the importance of mentoring aspiring musicians. Because of this, Imani Winds continues to facilitate learning through these classes and hosts annual Chamber Music Institute at Julliard.

For Imani Winds' West Texas debut, the group will play one of the pieces from its Legacy Commissioning Project as well as two arrangements from classical composers Claude Debussy and Igor Stravinsky.

"Because we've been together for so long, we have this energy and this kind of passion for what we do that I think brings a different level of virtuosity and a cultural background to what we do," Adam said. "We aim so high to bring down this barrier that people associate with classical music. Just that freshness, period, will keep people's attention on us, and therefore, our projects will have some light on them for years to come."