The sound of the Victory Bells ring out through the night as Texas Tech celebrates another triumph. 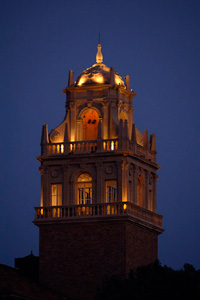 The east tower houses the Victory Bells. The ringing of the bells occurs on special occasions and when Texas Tech wins an NCAA game.

The Victory Bells, donated by the senior class of 1936, first chimed when the class graduated from the university. The bells then stayed quiet until Arch Lamb began creating history that September.

"Arch Lamb would go up to the bell towers after a winning football game and ring the bells," said Sean Cunniff, the first chair vice president and public relations chairman for the Saddle Tramps.

When Texas Christian University and Texas Tech football faced off in 1936, Texas Tech dominated the field and Lamb ran up to the bell tower. He rang the bells throughout the night.

"The city complained about the bells," Cunniff said, "and that is why we are only allowed to ring them for about 30 minutes."

The Saddle Tramps and High Riders are the only ones who ring the bells on special occasions or NCAA victories.

"After a football game all the Saddle Tramps go up to the bell tower and we sing our fight song," Cunniff said.

Along with decorating the campus with red and black streamers, the Saddle Tramps also decorate the Victory Bells with the colors of Texas Tech. The first time Cunniff had the chance to ring the bells was when Texas Tech beat the University of Oklahoma in 2007.

"They told me I had to learn how to ring the bells that day. At first I was upset because I would have to miss the end of the game, but we got up to the bell tower and turned on the radio. We listened while Texas Tech beat Oklahoma, and then we started ringing the bells."

The Saddle Tramps time how long the bells ring, but with certain wins, the bells are known to ring for a longer period of time.

The Victory Bells not only represent the victories at Texas Tech, but for Cunniff, he said they are part of the unique traditions at the university.

"When they ring I am proud to be a Red Raider and it means Texas Tech took care of business."