School of Music to Perform "Godspell" 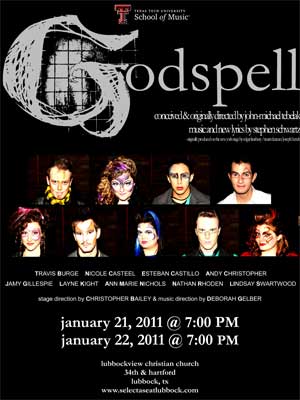 The "Godspell" performance will be revamped with improvisation and contemporary themes.

A Winter Dinner Theatre production of the Broadway musical, "Godspell," will be presented by the Texas Tech Music Theatre at 7 p.m. Jan. 21-22 at the Lubbockview Christian Church (3301 34th St.).

A hit in the 1970s, Godspell is enjoying a revival today in an updated version. Attendees will have the opportunity to enjoy a dinner while watching a performance from Broadway-bound performers. The "Godspell" performance will be under the stage direction of Christopher Bailey and the music direction of Deborah Gelber, both graduate students.

"Godspell" embraces the 21st century in this new production of one of the longest-running and most beloved off-Broadway musicals. The performance uses improvisation and contemporary themes to illustrate the parables and bring these lessons to life through the tradition of musical theatre.

The score, by Academy and Grammy Award winner and six-time Tony Award nominee, Stephen Schwartz (Wicked, Pippin), features recognizable songs that have become staples of both the American musical theatre and popular culture.

Based on the Gospel of St. Matthew, "Godspell" was originally a senior thesis directing project for Carnegie Mellon University Master of Fine Arts Candidate John-Michael Tebelak. Like the book, the "Godspell" performance exclaims a message of tolerance, kindness and hope.

"Godspell" opened off-Broadway at the Cherry Lane Theatre on May 13, 1971, when it received rave reviews from critics. After five years of sold-out audiences, "Godspell" made its Broadway debut on June 22, 1976, at the Broadhurst Theatre.

Critics commended the show for being equally as exciting on Broadway as it was at Cherry Lane. The show would later move to the Plymouth and the Ambassador before closing on Sept. 4, 1977, after 527 performances. In all, the musical achieved more than 2,600 performances both on Broadway and off.

Tickets are $25 for general admission and $15 for students. A discount of $2 per ticket is also available for groups of 15 or more. All tickets are available through Select-A-Seat by calling (806) 770-2000. Prices do not include a $3.25 Select-A-Seat service charge.