Commonly known as rabbit fever, the bacteria can cause sickness or even death in humans and animals. 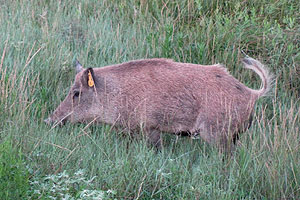 Caution is urged to anyone who may come in contact with wild animals, especially those who might hunt or eat wild hogs.

After finding evidence in feral hogs of the bacteria that causes tularemia, researchers at The Institute of Environmental and Human Health (TIEHH) at Texas Tech are warning hunters and ranchers to use caution when handling wild game.

Steve Presley, a zoonotic disease researcher at TIEHH, leads a team of researchers that tested about 130 feral hogs from Crosby, Bell and Coryell counties. Of the animals tested, 50 percent of the Crosby County pigs and 15 percent of the central Texas pigs showed evidence of current or past infection with Francisella tularensis.

"We have found high levels of antibodies in these pigs that show they have been infected with Francisella tularensis and found that some of these pigs were actively infected with it," Presley said. "The bacteria are constantly present in animals in this area and the feral hog population, but normally it's only a small number of cases. This is a huge number of infected animals."

Tularemia is a serious infectious disease caused by the bacteria Francisella tularensis, he said. Commonly known as rabbit fever, it can be carried by rodents and wild game animals as well as mosquitoes, deer flies and ticks.

Most human infections become apparent after three to five days, and signs include fever, lethargy, anorexia and signs of septicemia. Lesions can form on the skin where infections start. It also can enter the body if infected body fluids come in contact with the eyes, nose or mouth. In some cases, the bacteria become easily airborne and can be inhaled.

However, Presley's team of scientists has yet to determine which subspecies of bacteria is infecting the hogs. One subspecies, called Type B, can cause disease in wildlife domestic animals and people, but poses a less serious health threat to humans.

Type A can be lethal to humans and is considered a viable bioweapons agent by the Centers for Disease Control and Prevention.

Presley and Brad Dabbert, associate chairman of Texas Tech's Department of Natural Resources Management, discovered the bacteria while looking for brucellosis, another highly contagious disease caused by bacteria that infects humans when they ingest unsterilized milk or meat from infected animals or come in close contact with their secretions.

Though the team found no evidence of Brucella, Dabbert said he was surprised to find evidence of Francisella tularemia.

"Traditionally, it's a rabbit disease, but it does get reported in birds and other mammals," Dabbert said. "Since hogs can range over large areas, it's certainly possible that they can transport this stuff. That's kind of the critical issue now. The other thing we're trying to do is look for it in other animals now to more accurately answer that question."

Regardless of the type of bacteria, Presley urged caution to anyone who may come in contact with wild animals, especially those who might hunt or eat wild hogs.

"If you are handling or cleaning or eating wild game, particularly hogs, deer or rabbits, you should be wearing rubber gloves and eye protection when you're dressing wild game," he said. "The bacteria can enter any sort of small cut or hangnail. During this time of year, it might not be as big of an issue, but you should check yourself for ticks, wear tick repellent and avoid biting flies, including mosquitoes."

Presley also recommended making sure game meats are thoroughly cooked before eating them. Homeowners and lawn care professionals should look for wild rabbit nests hidden in tall grasses prior to mowing.

Behavior Change Slow or Impossible if Process is too Difficult