6,100 years ago, winemakers in an Armenian cave used to stomp grapes on the clay platforms allowing the juice to run into buried jars to ferment. Photo courtesy of National Georgraphic

The rise of the Mesopotamian city-state of Uruk was still a good 500 to 700 years away. However, inside a remote cave in what would become Armenia, a small group of people stomped grapes in what was recently described as the oldest-known winemaking operation.

Stefan K. Estreicher, Horn Professor of Physics and author of "Wine: From Neolithic Times to the 21st Century," said the recent discovery of the 6,100-year-old facility shows the community had a highly advanced, if not arduous, method for making wine, and that wine probably played an important role in their lives.

"The interesting thing is that this is a very ancient site in a small settlement during a time when there are no cities," Estreicher said. "I assume there were only a few hundred people living there. But they really had a very sophisticated setup to make wine. This setup was used only once a year. That's quite remarkable. They spent a lot of time and effort for something they used so little, so that indicates how important wine was to them."

The discovery of the Areni-1 site was made by archaeologists at University of California at Los Angeles and Irish and Armenian scientists. Tucked in a cave complex near Armenia's southern border, radio carbon dating confirms that the site dates to 4100 B.C. The Journal of Archaeological Science recently published the findings.

Inside the cave, scientists found a fermenting vat, storage jars and a rudimentary press, along with grape seeds, stems and a cup fashioned from animal horn. Chemical analysis of wine residue in the jars showed presence of malvidin, a chemical that gives red grapes their color.

The very first winemakers probably used baskets to stomp the grapes and extract the juices, Estreicher said. At the Areni-1 site, winemakers had constructed several small platforms of compressed clay with raised edges.

It appears that workers would stomp grapes on the clay platforms and allow juices to flow directly into jars buried in the ground to prevent cracking during fermentation from carbon dioxide buildup, he said. Later, ancient Romans would also bury their wine containers, called dolia, to prevent the clay from cracking.

The method is reminiscent of the modern lagar, still used in the Upper Douro Valley of Spain and Portugal to make the best ports, he said, and the Areni-1 site could be labeled a "proto-lagar." 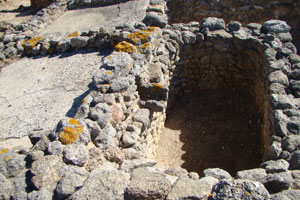 The oldest suriving ancient lagar was built about 3,000 years ago.

Though the Egyptians drew images of workers in lagars, the oldest surviving ancient lagar was built about 3,000 years ago by Phoenicians in southern Spain, he said.

The Armenian cave find is at least a thousand years younger than the oldest archeological evidence of winemaking – the Neolithic site at Hajji Firuz Tepe of northwestern Iran. However, the 7,000-7,400-year-old site does not contain winemaking equipment, only grape pips and jars containing evidence of wine residues.

At both the Hajji Firuz Tepe and Areni-1 sites, the wine was made with cultivated grapes known as Vitis vinifera vinifera, and not with its wild ancestor Vitis vinifera sylvestris.

"Neolithic times are the end of the Stone Age," he said. "People stopped being hunter-gatherers, established permanent settlements, domesticated animals and cultivated wild plants. In the case of wild grapes, the farmers selected the few hermaphroditic plants from the wild male and female plants because they produce more fruit and larger berries. These cultivated wild hermaphrodites are what evolved into Vitis vinifera vinifera, which we use today."

Estreicher said his love of winemaking began after tasting a 1949 Richebourg when he was a graduate student in Switzerland. His book grew from years of notes and a short magazine column explaining the history of wine. He plans to publish a second edition soon.

"If you are a theoretical physicist, I think you need to have a good hobby," he joked. "The history of wine is a very nice hobby to have. It's also a very interesting one. It's one way to look at Western Civilization, and I've always been interested in history. You find links to your past."

Alumna Splits Past from Present