To celebrate 75 years of archaeological discoveries, presentations will be held year-long. 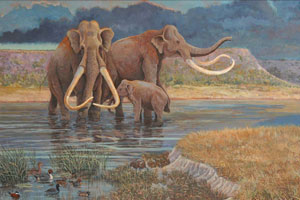 Columbian mammoth (Mammuthus columbi) was even larger than the more familiar Woolly Mammoth, and went extinct approximately 10,000 years ago.

A giant Columbian mammoth basks beneath the sun on a balmy winter afternoon, the gentle winds stirring the waist-high grasses and wafting the massive animal's scent across the nose of a scavenging short-faced bear.

A camel drinks from a nearby pond, which a few minutes before, was the wallowing site of an enormous ancient bison.

This could have been a typical day at the Lubbock Lake National Historic Landmark in Lubbock, Texas, 12,000 years ago, said Eileen Johnson, director of the landmark.

On Sunday Johnson delivered "Discover…The Pleistocene," the first presentation in a year-long series commemorating 75 years of archaeological discoveries at the landmark – one of the largest continuously inhabited hunter-gatherer sites in the New World.

A new exhibit titled, "From Mammoth to Mouse," also opened in conjunction with the event and features specimens uncovered at the landmark.

Remains of ancient animals, such as the lower mandible of the Columbian mammoth, a bone from the hind leg of a camel and the skeleton of a Dire wolf are all on display at the new exhibit.

Directing the landmark for almost 40 years, Johnson said although the landmark has made substantial research progress during the last century, she foresees great potential for the site.

During the presentation, Johnson defined three terms which are essential to understanding the ever-changing ecosystem:

Remains of species from all three categories were discovered at the landmark's 335-acre site such as: the extinct giant armadillo, the extant yellow mud turtles and the extirpated gray wolf, which now lives up north.

Johnson said many of the extant species have undergone great transformations since the end of the Terminal Pleistocene 11,000 years ago to accommodate the environmental alteration from a maritime climate of rainy, warmer winters, cooler summers, and temperatures that never dipped below freezing, to the current continental climate.

Johnson's Ice Age Animals presentation also addressed the debate of extinction and range changes. She hypothesized that contrary to what many believe, the extinction and mobilization of many species was not a concurrent result of a great shift in glaciers, but a gradual shift by each individual entity.

"Discover…the Pleistocene" was only the first of 11 other monthly events to celebrate 75 years of discovery at the landmark.

Next month's topic, "Discover…Paleoindian Territories and Landscapes," will cover the first hunter/gatherers of the Lubbock area. February's events will include a family day for all ages from 10 a.m.-4 p.m. Feb. 19 followed by a presentation for young adults to adults from 2-4 p.m. Feb. 20.

Johnson said she looks forward to spending the next year celebrating the landmark's history and progress and sharing these ancient discoveries with the modern Lubbock community.