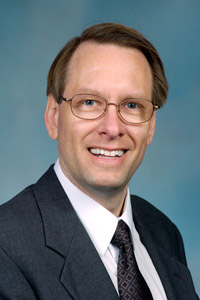 Membership to the American Law Institute is based on professional achievement and demonstrated interest in improving the law.

A Texas Tech School of Law professor has been elected into the most prestigious professional organization in the legal profession, the American Law Institute (ALI).

"Professor Beyer is one of those exceptional professors who excels across the three areas of teaching, scholarship and service," Fortney said. "We are thrilled that he now joins the other Texas Tech University law professors who are distinguished members of ALI."

In December Beyer received the 2010 Chancellor's Council Distinguished Teaching Award, the highest teaching award at Texas Tech. In addition, his "Wills, Estates, and Trusts Prof Blog" was selected by ABAJournal.com readers as their favorite in the 2010 ABA Journal Blawg 100 Law Prof Plus category.

Joining the faculty of the Texas Tech School of Law in June 2005 as the Governor Preston E. Smith Regents Professor of Law, Beyer previously taught at the St. Mary's University School of Law in San Antonio and has served as a visiting professor at several other law schools including Boston College, Southern Methodist University, the University of New Mexico, Santa Clara University and LaTrobe University in Melbourne, Australia.

Beyer is a frequent contributor to both scholarly and practice-orientated publications and has authored and co-authored numerous books and articles focusing on various aspects of estate planning. He is an academic fellow of the American College of Trust and Estate Counsel (ACTEC) and maintains membership in numerous organizations including the American Bar Foundation, the Texas Bar Foundation and the College of the State Bar of Texas.

He serves as a member of the Real Estate, Probate, and Trust Law Council of State Bar of Texas, president of the South Plains Trust & Estate Council, member of the advisory board for 2nd Chance for Pets, secretary of the State Laws Committee of ACTEC, Recent Developments Coordinator of the Legal Education Committee of ACTEC and has served as the editor of the Keeping Current column of Probate & Property magazine since 1992.

ALI's membership is selected from judges, lawyers and law teachers in the United States and many foreign countries on the basis of professional achievement and demonstrated interest in improving the law. The 4,300 members of ALI draft, discuss, revise, and publish restatements of the law, model statutes, and principles of law that are enormously influential in the courts and legislatures, as well as in legal scholarship and education. ALI has long been influential internationally and, in recent years, more of its work has become international in scope.

ALI was founded in 1923 by a group of prominent American judges, lawyers and law teachers to address the uncertainty and complexity of early 20th-century American law. Since that time ALI has devoted itself to improving the law and the administration of justice in a scholarly and scientific manner.