A young boy goes from watching Texas Tech football on TV to watching from the sidelines at Jones Stadium, and he develops an unforgettable relationship along the way. 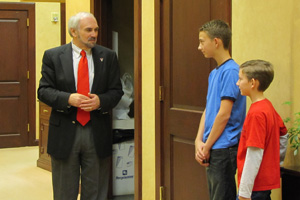 Across states, mountains, rivers and seas, people have communicated to one another for centuries – often times in a note to say "hi," share news and keep up with one another. The term "pen pal" is often described as a person with whom one keeps an exchange of letters and is usually someone who lives so far away that a personal meeting is unlikely. And that's the type of relationship that developed over 1,500 miles between a university president and 9-year-old boy with big dreams.

"The Red Raiders were good at the time I watched, and I just liked them for the second year now," Matthew said. "I got my mom's laptop and wrote a letter, and that's how it started."

Matthew's letter, addressed as "Dear Texas Tech," explained how much he liked the university, how he wanted to attend school there and his dreams of becoming the running back on the football team. When Matthew's mother, Jamie Moso, read the letter, she was impressed by how well-thought out it was and decided to send it to someone at Texas Tech. She searched the Internet about the university so unfamiliar to her, found Texas Tech President Guy Bailey's contact information and e-mailed him the letter, not anticipating a response.

"I just thought he might enjoy reading this letter from this little boy in California who is passionate about coming to Texas," Jamie said.

By 5 a.m. the following day, Bailey had responded to the letter, much to the Moso family's surprise.

"I wrote him back, and I said, 'study hard, take college prep courses, and you need to work out and practice a lot,'" Bailey said. "So we became pen pals, more or less."

The e-mails between Bailey and Matthew continued as the two talked about anything from academics to Red Raider sports. Last fall, Bailey invited the family to a football game, and Matthew, alongside his mother and older brother Patrick, finally got to experience a Texas Tech football game firsthand.

Not only did Matthew watch Texas Tech defeat Weber State 64-21 during his visit, he also got the chance to meet his hero, Texas Tech running back Baron Batch, which Matthew said was his favorite part of the trip.

"Mr. Bailey said Batch would be a big guy and that he had a lot of energy and a good personality," Matthew said. "He signed my shirt, gave me a glove and took me to the locker room where I tried on his pads and stuff. It was pretty cool."

Matthew and his family also enjoyed meeting Texas Tech football coach Tommy Tuberville and quarterback Taylor Potts. Other highlights from his trip to Texas Tech included throwing t-shirts with Bailey to cheering fans during halftime at the football game and watching a men's basketball game in the United Spirit Arena. 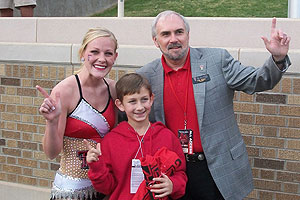 Not only did Matthew watch Texas Tech defeat Weber State 64-21 during his visit, but he also met the twirlers, Baron Batch, Tommy Tuberville, Taylor Potts and the Masked Rider.

Although Jamie has talked to Matthew about him attending universities close to their hometown in California, Matthew is set on Texas Tech. After visiting Lubbock and Texas Tech herself, Jamie is convinced her son would succeed here.

"I didn't think Texas Tech was going to be a university that had this many schools – law school, medical school, school of engineering – it's impressive," she said. "It's like a city within a city, and everybody we've talked to said it's a great school."

Bailey, who grew up having an interest to do well in school and sports himself, can relate to young people like Matthew, who have similar ambitions. He said he looks forward to having the Moso family visit again this spring to attend a Texas Tech baseball game.

"It's no question in my mind Matthew will go to college, which is the most important thing," Bailey said. "And we'll probably see him here one day at Texas Tech."