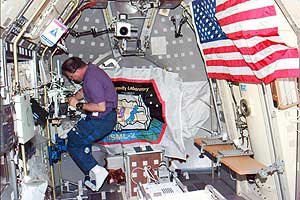 A chemical engineer by trade, it was his research with zeolite crystal growth (ZCG) that landed Sacco a seat on the Space Shuttle Columbia in 1995. Photo Courtesy of NASA.

When he arrived at Texas Tech, there were two things that Al Sacco Jr. said impressed him greatly: the overwhelming support and generosity of the alumni, and the university's forward thinking.

As the new dean of the Edward E. Whitacre Jr. College of Engineering, Sacco firmly believes that Texas Tech's cutting-edge research in photonics, nanotechnology and wind engineering has the potential to change the world as we know it, but only if Texas Tech continues to push the envelope.

"Texas Tech University is competing for the best and brightest," Sacco said. "We must make Lubbock attractive not only to prospective students, but graduates and job-seekers interested in growing their career."

The challenge begins, he said, in transforming Texas Tech into a community of scholars, not just a group of individuals, and delivering inspiration to generations to come.

"Our world is technology driven, but fewer students are becoming involved in math and science," Sacco said. "China and India are quickly catching up – and in some cases surpassing us – and developing technologies that can impact our economic future as well as our freedoms."

Sacco said this problem could be addressed through community outreach and hopes his experience as a NASA astronaut might grab prospective students' attention.

A chemical engineer by trade, it was his research with zeolite crystal growth (ZCG) that landed Sacco a seat on the Space Shuttle Columbia in 1995. A zeolite crystal's three-dimensional structure acts as a sieve to selectively filter certain chemicals (molecules) in applications such as chemical and petroleum processing. A larger crystal would allow researchers to better understand how these crystals form and grow and define its structure, while improving storage and efficiency. The challenge, however, was growing that larger crystal. See more about Sacco's research with NASA.

"The Earth's gravity plays a role in the crystal's formation and growth. Like the formation of snow flakes here on earth, where the unique shapes are controlled by environmental conditions and the snow flake's falling rate. In a similar manner, gravity can impact the structure and shape of many crystals," Sacco said. "However, ZCG in a microgravity environment allow the crystal to grow larger, with less distortion." 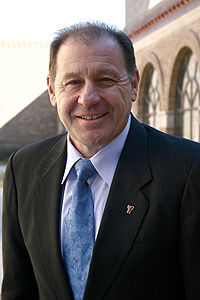 Sacco envisions a world that can essentially sustain itself and cited an example of street lights powered not by electricity, but by nutrients hidden in the soil beneath it.

Sacco's work in the pressurized Spacelab module of Columbia proved successful, with crystals growing up to 50 times larger than ever before. That technology now is being applied to continuing ZCG research on Earth. The result may improve the efficiency of many electronics, including the handheld devices so many have come to rely on.

Understanding and utilizing the existing resources is Sacco's passion. He envisions a world that can essentially sustain itself and cited an example of street lights powered not by electricity, but by nutrients hidden in the soil beneath it. He said that kind of research comes from a mutual effort between physical and biological systems, and communication between the two is key.

"Tier One means working together and striving for what comes next," Sacco said. "My goal is to build a better line of communication between all Texas Tech colleges, not just engineering, and with Texas Tech University Health Sciences Center, as well."

His method of operation includes getting to know the people who surround him and gaining their trust.

"We will continue to move forward as long as we allow people to excel at what they do best. We must understand their strengths, and develop their goals and aspirations in a positive way," Sacco said. "That takes time."

Soon, that research will take place in a new building. Sacco will oversee renovations to the building currently occupied by the College of Mass Communications. Renovations and new equipment are necessary, at an estimated cost of $35-$40 million.

"My goal is to make Texas Tech University the top research facility in Texas and beyond" he said.