Alumna Splits Past from Present

Jane Kuykendall recalls how different Texas Tech was in 1939.

As told to Ioanna Makris 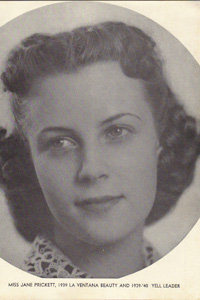 Kuykendall, then known as Jane Prickett, in the 1939 Texas Tech yearbook, La Ventana. She was voted best beauty and was also a yell leader.

At the age of 89, Jane Kuykendall is a force to be reckoned with. Kuykendall, who graduated from Texas Tech with a business administration degree, recalls how the university has changed since her freshman year in 1939 and shares her secret for being able to do the splits even after many years of not cheerleading.

How has Texas Tech changed since 1939?

It is completely different. It was a small school, very friendly, and everyone knew everyone. We were one big family at Texas Tech. The girls' gym class was across the circle, now known as Memorial Circle. The weather was much more sandy and walking from the Administration Building to gym class your legs would get peppered with sand because there was no grass.

How did the 2010 homecoming performance occur?

Alicia Knight called me and she told me she wanted me to come to a cheerleading reunion. That is how the performance occurred. When I did the splits all the girls gasped.

What did you do on your time off?

Lubbock was dry. We were not exposed to alcohol and no alcoholic punch was available at the sorority and fraternity parties. When we danced the boys stood in the middle and the couples danced around them. You did not dance more than two to three steps without changing partners. 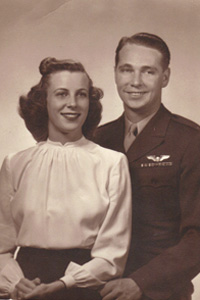 Kuykendall with her husband Roger Kuykendall, while they were both students at Texas Tech.

What are some of your favorite memories at Texas Tech?

When it would rain we would take our shoes and socks off and run by the Chemistry Building. We would wade in the mud.

There used to be a drugstore on Congress Avenue, now University Avenue, and we would all go around 10 a.m. and buy a fudge square and ice cream. In the basement of the store they had a juke box and we would go dance and have a good time. Nobody ever wanted to have class at 10 a.m.

How did World War II change the atmosphere at Texas Tech?

All the young men immediately went to war. They all volunteered to defend the U.S; it was a great show of patriotism.

How did you meet your husband?

We went to the same high school in Lubbock and we started going together. He was voted favorite senior boy and I was voted favorite senior girl. Once we got to Texas Tech it was so glamorous. He got two silver dollars and gave one to me and he had the other. He told me when we turned 21 we would put them together and get married. I now have two children, five grandchildren and 10 great-grandchildren. 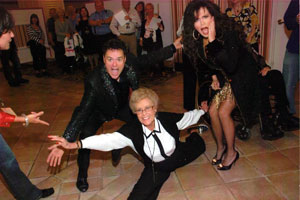 Kuykendall doing the splits while Donny and Marie Osmond look on.

How were football games different in the late 30s and early 40s?

The student body was very loyal. We went to every game. If we had a bowl game, the princess would go. Everybody knew the school songs and we did not have Raider Red. We only had a horse and our Matador. The most exciting time of the games would be when the horse would run around the circle.

We were not called cheerleaders then. We were called yell leaders, and we would go to every game and cheer on the football team.

Not many people can do the splits at 89; what are your tricks?

As I was growing up I had lots of broken bones. Even at Texas Tech I was not able to do P.E. At 50 I had heart surgery and I started exercising. I go every day except on the weekends.