Ron Kendall will discuss the environmental impact of the Deepwater Horizon disaster for 'BLOWOUT: IS CANADA NEXT?'. 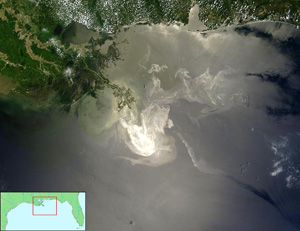 A Texas Tech researcher will discuss the environmental impact of the Deepwater Horizon disaster for "BLOWOUT: IS CANADA NEXT?", a new documentary by Up Front Inc. airing nationwide Dec. 9 on Canada's CBC Television.

Ron Kendall, director of The Institute of Environmental and Human Health (TIEHH), was interviewed by the team this summer. Filming off the coast of Louisiana, he discussed the toxic effects of oil and dispersants on birds, reptiles, shrimp, fish and other wildlife.

"The unprecedented oil spill in U.S. waters from the Deepwater Horizon event, along with the heavy use of dispersants, has created short-term impacts to the environment and human health," Kendall said. "Now we are investigating the long-term or more chronic effects this oil will have on the Gulf of Mexico's ecosystem. It is still an unfolding ecotoxicological event, and many species of fish and wildlife could still be at risk."

During his career, Kendall was a part of the assessment for the Exxon Valdez as well as other oil spills and contamination events. He also served as chief editor of "Wildlife Toxicology: Emerging Containment and Biodiversity Issues," published by CRC Press.

The book is the first reference to address environmental threats to wildlife in a single volume and recommend proven mitigation techniques to protect and sustain Earth's wildlife populations. Within a month of its release May 10, the book was labeled an international bestseller by the book's publishers.

On April 20, the Deepwater Horizon rig exploded, ultimately unleashing 200 million gallons of oil into the Gulf of Mexico. The event caused extensive damage to marine and wildlife habitat, as well as to the Gulf's fishing and tourism industries.

In May 2010, Chevron began drilling Canada's deepest well off the coast of Newfoundland. This begs the question: Could an oil spill of the same magnitude happen in Canada?

The documentary tracks the aftermath of the worst oil spill in U.S. history, and transposes the oil spill to Canada's Grand Banks. By documenting the latest scientific findings in the Gulf, the piece builds a picture of what an offshore drilling disaster would look like on Canada's East Coast.

The show will air at 9 p.m. throughout Canada and parts of the United States. In Newfoundland, it will air at 9:30 p.m.