The Man Behind the Voice

Texas Tech alumnus is leaving his footprint on the aftermath of the Haiti earthquake. 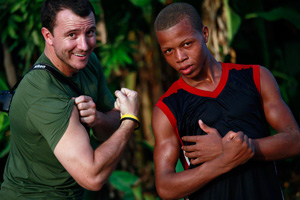 Justin Yarborough is dedicated to helping the children and homeless who have been affected by the 2010 earthquake in Haiti.

The pair quickly packed their bags, along with food and medical supplies, and headed for Haiti. Kennedy Granger and Justin Yarborough landed in the Dominican Republic before securing a helicopter to the embassy in Port-au-Prince.

On Jan. 12, 2010, a magnitude 7.0 earthquake killed approximately 230,000 people and left 1.2 million homeless in Haiti. Two days after the tragic earthquake, Yarborough, a Texas Tech alumnus, was introduced to Granger, a classmate from Saint Mary's Law School. Granger was born in Haiti and her three daughters and family still lived there.

The perfect strangers embarked on a trip that would change their lives.

"I quickly realized nothing was going to deny this mother from looking for her children," Yarborough said, "so I asked if I could go with her."

Once landed in Haiti, Florence Thybulle, founder of RENMEN Orphanage, picked up Granger and Yarborough and took them through the ruins of Port-au-Prince, Granger's old home.

Trying to find their way through the dark night, Yarborough and Granger headed straight for her home and realized it was all rubble. The area looked like a war zone and the flashlight used provided little light.

"Kennedy began crying out the names of her children," Yarborough said. "Then out of the darkness they appeared, saying 'Mom, we are here.'"

The reunited family and Yarborough were taken back to the orphanage where they spent the night. Yarborough said they returned to the U.S. Embassy the next day to take a military transport back to the United States.

On their return, CNN's Wolf Blitzer and many other media outlets contacted Yarborough and Granger. They began sharing their story with the world.

Watch the interview with Wolf Blitzer.

"We realized our story touched many people," Yarborough said, "and that a golden opportunity presented itself to harness this momentum and find a way to give back to those in need."

Since the night Granger was reunited with her family, Yarborough has returned to Haiti many times and has focused his attention and energy on helping two orphanages in Haiti and Tent City through his newly created organization "We Hear Your Voice."

The orphanages have struck a chord with Yarborough. He said the first one, Foyer Pour Les Enfants (Hope for the Children), is run by one of Granger's friends and has 'adopted him' whenever he visits. The other orphanage, RENMEN Orphanage, is run by Thybulle, whose children inspired Yarborough by their resilience just days after the earthquake.

Yarborough's organization is dedicated to helping those in need in Haiti, and share the Haitians' story with the world. He said a feature documentary has been created, and he is raising money for the children in need.

With short-term goals focused on food, clothes, shelter and medical supplies, Yarborough said he would eventually like to see the organization grow to build sustainable models of relief and development for the communities the organization serves.

"We acknowledge that the situation in Haiti is unique," he said, "and it involves very pressing and immediate needs, which can sometimes temporarily shift an organization's direction."

Along with the documentary and different goals he would like the organization to reach, he has also created Project Thirty.

Project Thirty: $30 for 30 Days, is an effort Yarborough has put together with his organization. He will be leaving for Haiti on Dec. 14 and returning Jan. 16. While in Haiti he will be living in Tent City and the orphanage he has been helping to support. The significance of the trip is great for Yarborough.

He will spend his 30th birthday in Haiti, and the 30th day of the trip will fall on the one year anniversary of the earthquake. Yarborough said he wants to spend his birthday there for very basic reasons.

"It is pretty simple. I wanted to help, and one of the best ways to help is to let them know we have not forgotten," he said. "For me, it is an easy way to walk in their shoes and to know and understand what they face every day, and how we can best meet those needs."

Dayna Yarborough, Justin Yarborough's mother, said he has always thought of others and is full of hope.

"Helping others has always been his nature," she said. "College encouraged him to spread his wings and become himself. College instilled a need in him to help those less fortunate."

Throughout the years she said she has been supportive of Justin's dreams of helping others.

"He does not do just the right thing," she said. "He does the good thing."

She said while Justin was attending Texas Tech she saw him flourish. He learned to be a part of a team and grow into his own.

Justin Yarbrough majored in international business and Spanish, and was also a walk-on to the football team.

"It was definitely challenging to manage the demands of both school and football," Justin Yarborough said, "but looking back it has probably prepared me for different pursuits—from the Marine Corps to law school and now Haiti."

Justin Yarborough said he wants to educate people about how dire the need in Haiti is and grab their attention to help in any way they can.

"Personally, I plan on having a lifelong presence in Haiti," Justin Yarborough said. "The children at Marie Jo's orphanage have,after all, 'adopted me.'"

Why did you decide to attend Texas Tech?

Yarborough: My grandfather took me to the 1998 Texas Tech vs. Texas football game in Lubbock. The Red Raiders won, celebration ensued, and my decision was made

What is your most memorable experience at Texas Tech?

Yarborough: The friends I made. I don’t think it's too common for a group of guys to meet in the dorms and to remain friends with the each other for a decade after. We had a very unique bond. We still meet a couple of times a year for football games, charity events, weddings, etc.

What was your favorite part of attending Texas Tech?

Yarborough: Walking on to the football team was a very proud accomplishment for me

Being a part of a Division I team was a special memory. At the time I took it for granted, but to be able to share the locker room with guys like Kliff Kingsbury, Wes Welker, Ricky Williams, and Kevin Curtis was something I’ll never forget.

What is your favorite tradition?

Yarborough: Will Rogers and Soapsuds. From wrapping the statue before each game to the horse's backside facing in the direction of rival Texas A&M, this is a tradition hard to beat!