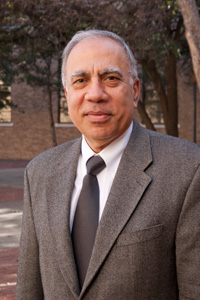 "Mohamed brings a wealth of experience to Texas Tech from his work in the petroleum industry at Halliburton," said Jon C. Strauss, interim dean of engineering. "He is the right person to lead the Bob L. Herd Department of Petroleum Engineering to new heights of excellence in instruction and research."

Soliman has a bachelor's degree in petroleum engineering with top honors from Cairo University, and master's and doctoral degrees in petroleum engineering from Stanford University. His career has focused on reservoir completion and production engineering. He holds 17 patents on fracturing operations and analysis, testing and conformance applications. He is an author or co-author of over 150 technical papers and articles in areas of fracturing, reservoir engineering, well test analysis, conformance, and numerical simulation. He has designed and analyzed hundreds of pressure transients, FET, and micro-frac tests. He is a distinguished member of the Society of Petroleum Engineers.

Soliman was responsible for the development of the analysis technique of Halliburton's limited-emissions FasTest® well testing system, a winner of the 2005 Hart's E&P Meritorious Award for Engineering Innovation. He also conceived the concept and developed the philosophy for the QuikLook numerical simulator. He led the actual development of the software and guided it into what has become the main simulator used by Halliburton engineers. The software is also used by several operating companies, generating considerable direct, consulting, and pull-through revenue. He has developed multiple fracturing design and analysis, well testing, and reservoir engineering techniques, and has authored several engineering software packages that are in current use. He has authored chapters in World Oil's Handbook of Horizontal Drilling and Completion Technology, the text Well Construction, and the SPE monograph Well Test Analysis of Hydraulically Fractured Wells.

"Dr. Soliman has strong leadership capabilities and a solid reputation in the petroleum industry," Bailey said. "His vast experience makes him a natural choice."

"It is a great honor to be trusted to lead the Petroleum Engineering Department at Texas Tech. I am excited about this opportunity and I firmly believe that the petroleum engineering department as a team will achieve a great standing academically and within the industry as a tier one program in the near future."