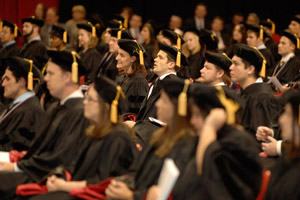 Commencement exercises for the College of Arts and Sciences begin at 4 p.m. Friday. The Graduate School ceremony follows at 7 p.m.

The Colleges of Education, Visual and Performing Arts, Human Sciences, Architecture and the Edward E. Whitacre Jr. College of Engineering, as well as students receiving university studies degrees will attend the exercises beginning at 9 a.m. Saturday. A ceremony for the Colleges of Agricultural Sciences and Natural Resources, Mass Communications, the Rawls College of Business, the Honors College and University College follows at 1:30 p.m.

The School of Law Hooding Ceremony begins at 5 p.m. Saturday at the Allen Theatre in the Student Union Building.

A Texas Tech University alumna and lead station flight director at NASA will serve as speaker for December commencement exercises.

A member of the Board of Regents of the Texas Tech University System, John Huffaker, will deliver the main address at the December Hooding Ceremony of the School of Law.

Robert Withers, a School of Law joint degree (JD/MBA) student from Dallas, will be the event’s student speaker. Withers, a graduate of Texas A&M University, is a member of the TTU School of Law’s 2010-2011 Board of Barristers. Michael Hatfield, associate dean for research and faculty development, will be the Hooding Professor.

Huffaker, of Amarillo, was appointed to the Board of Regents of the Texas Tech University System on Feb. 6, 2009. He is a member of the Audit Committee and the Facilities Committee. His term expires on Jan. 31, 2015.

He is an attorney and a shareholder in the Amarillo law firm of Sprouse Shrader Smith P.C., and his practice areas include agricultural law, bankruptcy, banking, commercial litigation and employment law. He is board certified in civil trial law. A native of Tahoka, Huffaker earned his Doctor of Jurisprudence from the Texas Tech University School of Law in 1974. He earned a Bachelor’s of Science Degree in agriculture from Texas Tech in 1970.

Also recognized during commencement exercises will be bachelor’s degree candidates with the highest grade-point-averages in their respective colleges. Highest ranking December graduates for each college are: