Just like Dorothy, twisters in Kansas and Oklahoma carry Tanya Brown down the path to her future. 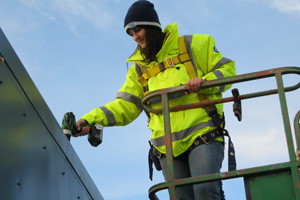 Tanya Brown on a manlift installing pressure taps on a replica building through her work with the Institute for Business & Home Safety.

"Growing up in Kansas and Oklahoma, you grow up either terrified or fascinated by severe weather."

That's the observation of Tanya Brown, who lived there until she was 9 years old. As it turned out, her whole future depended on her landing on the fascinated side. Brown is a 2010 graduate of the only doctoral wind science program in the country, part of Texas Tech's Wind Science and Engineering Research (WISE) Center.

She's earned a bachelor's degree in atmospheric science and a master's in water resources science, both from the University of Kansas (KU), but her interest in weather began far before her first year of college.

Brown remembers many times being woken up in the middle of the night by her mom, and driving to a nearby church, friend's house, or grandmother's, where her family could find safety in the basement. But she doesn't ever remember being really scared. Tanya thought storms were beautiful and powerful.

"My interest really kicked into gear when I was about 10 or 11," Brown said.  "My dad called one evening in May to tell my sister and me that his house in northern Oklahoma had been destroyed by a tornado, and that he had escaped by driving the two-mile drive to my grandma's to seek shelter in her storm cellar shortly before the storm hit. These were the kinds of things that happened to other people, not my family. At the time, we were living in Hawaii, as my stepdad had recently been assigned to an Army post there. So this didn't even affect my daily life, yet it is the moment that I consider to have permanently set me on my course, even though I didn't know it at the time."

It was in Hawaii that she got her first taste of another kind of threatening weather – hurricanes. She lived on the island when Hurricane Iniki made landfall in 1992. As fate would have it, they left Hawaii in 1995 to move to North Carolina, which was pounded by hurricanes multiple times in the late '90s. Brown says she never remembers there being a fear, but more a respect and fascination.

It was in high school that Brown really decided her career course.

"A lot of my friends knew they wanted to be doctors or lawyers or teachers or join the military," she said. "I wasn't so sure, but it was a high school boyfriend who suggested I look into studying meteorology. And that was it. I never for a second considered doing anything else."

This Institute for Business & Home Safety Research Center wind test demonstration subjected two full-scale houses to thunderstorm and straight-line wind conditions common in the Midwest. The homes are essentially the same, except the house on the left was built using conventional Midwestern construction standards and the house on the right was built to the IBHS FORTIFIED for Safer Living® standard for Midwest construction.

Brown was admitted to the water resources graduate program in the School of Engineering at KU. The majority of her studies focused on flooding hazards, but she says she got a real taste of some of the true civil engineering courses. It was then she realized that it was possible to not only study weather, but to study how to keep people safer from destructive storms.

"That realization brought me to Texas Tech in 2006 for the Ph.D. program, and I knew from the beginning that I wanted to study wind damage," Brown said. "I wanted to understand not only the events, but how they damaged structures, so that one day we could make them even safer, and so people like my dad wouldn't lose their homes, and would have more time to get to safety."

One of the first things at Texas Tech that made a big impact on Brown was her very first damage documentation trip." She traveled with Larry Tanner (a civil engineering research associate and instructor in WISE) to Central Florida following the Feb. 2, 2007 tornado outbreak to do a damage assessment. Coincidentally that was just one day after the new Enhanced Fujita Scale, developed by Texas Tech researchers, was officially adopted and put into place by the National Weather Service as the official way to rate tornado damage.

"It was then that I recognized I had a natural ability to understand the spatial extent of damaging events and to memorize particular locations and damage states," Brown said. "That proved to be a vital skill when I later used satellite and aerial imagery to evaluate wildfire damage for a project I worked on during my internship, and"tornado and hurricane damage states that were used in my dissertation project." 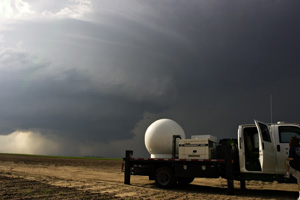 The ride of her life

A once-in-a-lifetime experience came with Texas Tech's involvement in the VORTEX2 project, funded by the National Science Foundation.

"I don't really know how to describe how lucky I was to be involved in V2. You can't quite describe it as a once-in-a-lifetime opportunity, because I actually got to do it twice!" Brown said about the project that took place over two spring tornado seasons in 2009 and 2010.

"I am one of only about 125 people in the entire world that got to be involved in that project, and it is something I am so very proud of. It is an amazing feeling to be involved in something so special, so rare, and so beneficial to society. Not everyone gets to be involved with work that will change the world, and I have been. And the level of involvement of the Texas Tech students was awesome. Chris (Weiss, assistant professor of atmospheric science) and John (Schroeder, director of WISE) really trusted us with literally millions of dollars of equipment, in a project of millions of dollars, to go out and do what we needed to do to collect the data. Knowing that you have the full trust of those two is something special in itself."

Since she finished her Ph.D., Brown now works for the Institute for Business & Home Safety headquartered in Tampa, Fla., at its research center in Richburg, S.C. She is a research engineer with her primary responsibility to design and oversee hail impact testing of structures. She also is overseeing testing of the Wind Engineering Research Field Laboratory replica building at the facility, as well as assisting with wind-flow characterization testing, and managing the on-site audio/video systems and hi-definition camera systems.

Brown was recently appointed as a faculty associate in Texas Tech's WISE Center, so she can continue making deployments with the Texas Tech Hurricane Research Team.

"My bosses here are very supportive of allowing me to continue that work," Brown said. "I was so thrilled to work that out. With the addition of the new radars, the number of team members has doubled, and I know John wanted to keep some experienced people around. Plus, I just flat out love field work, so I wasn't ready to give it up."

"Texas Tech is really where I first got my hands dirty. Through all my research, damage investigations and field work, I really got the chance to see firsthand just how dangerous and damaging various types of natural disasters can be, and how much is wrong with the way we build things. Now that I've seen what's wrong, my job here is to figure out how to make it right! We can't control the events, so we seek to control the things we can control: the structures. And that's really what this place is about. If you can figure out how things come apart, or how they are damaged, you can really begin to understand how to prevent those damages."

And it all goes back to the idea of making people safer from severe weather, by giving better forecasts and warnings and building better structures, Brown reiterated.

"I believe in fate. And for me, it all started with a tornado in Burbank, Oklahoma, in the early '90s."